WOMAN DRESSED AS THE DEVIL FOR HALLOWEEN WAS FOUND SHOT DEAD IN BROOKLYN! 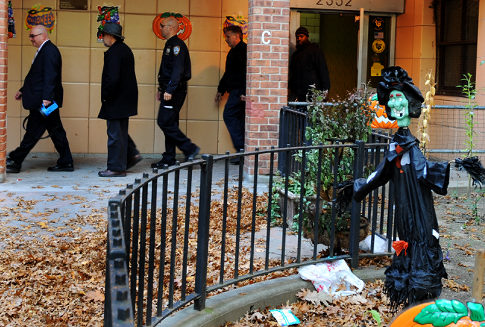 A woman dressed as a red devil was shot to death and her ex-con boyfriend critically wounded when the couple was ambushed in Brooklyn after returning from a Halloween party.
Ciera Glenn, 25, was shot several times in the chest early Saturday, while her companion Tyree Shelton was blasted in the face, witnesses said. Both collapsed in pools of blood in the lobby of a building at the Sheepshead Bay Houses.

"I opened the lobby door and I saw the young girl dead," said horrified neighbor Luke Kopelakis, 71, who stumbled upon the grisly scene. "There was blood in the elevator, blood on the walls."

Glenn, the mother of a 7-year-old son, and Shelton spent their final hours together at a late-night Halloween bash at the bar 95 South in Prospect Heights, the dead woman's sister said.

The couple walked past Halloween decorations, including pumpkins and a life-sized witch, when they returned to Shelton's apartment in the Batchelder St. building around 5:45 a.m.

Then shots rang out.

Shelton, who is in critical condition, has been arrested several times on drug charges and served nearly two years in prison after a 2006 conviction for gun possession, according to records.

The motive for the shooting remains a mystery as detectives looked for surveillance video and studied the bloody crime scene. No one has been arrested.

Glenn, who was set to graduate from Medgar Evers College in May, balanced her studies with a full-time job at a Coney Island car rental outlet and with raising her son, Robert, her sister said.

She was also president of Prime Squad A.C. Divas on Deck, an auto club that hosts fund-raisers and gives to charities.

"She was a wonderful mother," said a tearful Porter. "She was the life of the party. When you were feeling down, she would bring you right up."

"That was my heart right there," she said. "This is really hard."