VIDEO GAMES CAN MAKE YOU SMARTER! 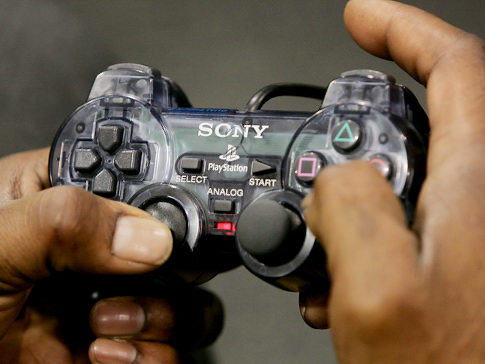 You're at the front lines shooting Nazis before they shoot you. Or you're a futuristic gladiator in a death match with robots.
Either way, you're playing a video game - and you may be improving your vision and other brain functions, according to research presented Thursday at a New York University conference on games as a learning tool.

"People that play these fast-paced games have better vision, better attention and better cognition," said Daphne Bavelier, an assistant professor in the department of brain and cognitive science at the University of Rochester.

Bavelier was a presenter at Games for Learning, a daylong symposium on the educational uses of video games and computer games.

The event, the first of its kind, was an indication that electronic games are gaining legitimacy in the classroom.

President Barack Obama recently identified the creation of good educational software as one of the "grand challenges for American innovation," and the federal Department of Education's assistant deputy secretary for the Office of Innovation and Improvement, Jim Shelton, attended Thursday's conference.

Panelists discussed how people learn and how games can be engineered to be even more educational.

"People do learn from games," said J. Dexter Fletcher of the Institute for Defense Analyses.

Sigmund Tobias of the State University of New York at Albany said an Israeli air force study found that students who played the game "Space Fortress" had better rankings in their pilot training than students who did not.

He added that students who played "pro-social" games that promote cooperation were more likely than others to help out in real-life situations like intervening when someone is being harassed.

Bavelier's research has focused on so-called first-person shooter games like "Unreal Tournament" and "Medal of Honor," in which the player is an Allied solder during World War II.

"You have to jump into vehicles, you have to crouch and hide," said Tammy Schachter, a spokeswoman for game developer Electronic Arts Inc.

Bavelier said playing the kill-or-be-killed games can improve peripheral vision and the ability to see objects at dusk, and the games can even be used to treat amblyopia, or lazy eye, a disorder characterized by indistinct vision in one eye.

She said she believes the games can improve math performance and other brain tasks.

"We are testing this hypothesis that when you play an action video game, what you do is you learn to better allocate your resources," she said. "In a sense you learn to learn. ... You become very good at adapting to whatever is asked of you."

Bavelier believes the games will eventually become part of school curriculums, but "it's going to take a generation."

Schachter said the purpose of "Medal of Honor" and other games is to have fun, and any educational benefits are a bonus.

"Through entertainment these games test your memory skills, your eye-hand coordination, your ability to detect small activities on the screen and interact with them," she said.

Not everyone is a fan.

Gavin McKiernan, the national grassroots director for the Parents Television Council, an advocacy group concerned about sex and violence in the media, said that when it comes to violent video games, any positive effects are outweighed by the negative.

"You are not just passively watching Scarface blow away people," McKiernan said. "You are actually participating. Doing these things over and over again is going to have an effect."

Bavelier said games could be developed that would harness the positive effects of the first-person shooter games without the violence.

"As you know, most of us females just hate those action video games," she said. "You don't have to use shooting. You can use, for example, a princess which has a magic wand and whenever she touches something, it turns into a butterfly and sparkles."