The Maybach Music Group founder referred to Williams as his "big homie" and says Williams is the reason why he's one of the most played artists in prison.

"That was my big homie," Rick Ross said. "That's who I looked up to. That's who raised us. That's who paid for studio time. Our very first studio time. Our very first mixes. Paid for the engineers and so on and so forth. He was a hood billionaire...You know, the type of person he is he never spoke to any outside sources. He was convicted, sentenced to life. He was close to 18 years in prison. He real special to us. He mean more to us than any record, any album, anything like that...Through what I understand I'm one of the most played artists, if not the most played artist in the chain gangs, in the federal systems. Just based on the names that I--And the things I talk about and the people that I talk about. And these people that cosign that, that knew him. That's my dog. That's real.

Ross also spoke briefly on fellow artist Jay Z as he addressed the competitive nature of rap music. He revealed that all the artists "sitting at the top," including Jay Z, have their eyes on him and Maybach Music Group.

"We still taking over the game," he said. "If we haven't completely took over it. And everybody know we want more. We want more. This the second album in two years. This is a very competitive sport. If you think these other dudes that's sitting at the top is not watching this right now, is not watching this, you crazy. Most definitely Jay. He most definitely got his eye on us because I know he proud of watching his little homie go and get it.

During his Google Hangout session, Ross clarified any confusion surrounding his Jay Z-assisted record, "Movin' Bass." After Ross premiered "Movin' Bass," the song's producer, Timbaland appeared on Power 105.1's The Breakfast Club to play what he says was the original version of the Hood Billionaire record. On the version Timbaland says was the original, his artist Tink is featured on the song.

But according to Ross, the version featuring Tink was not the original "Movin' Bass." He also added that he was "disappointed" upon hearing the version Timbaland played.

“You know Timbaland released his version that I was real disappointed in hearing," the rapper said, according to XXLMag.com. "You know me and Jay created the original version. That’s one of the records we vibed up when we had a couple sessions you know what I mean. Of course Timbaland produced it, you know had the production on it for a little while, and I went by the studio before and he played me the version and I was like, ‘I see what you did, but chill on that’ ya mean we were doing our thing on that.”

Rick Ross Says He's One Of The Most Played Artists In Prison? 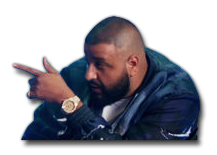 Gee, I wonder why?

Maybe the C.O's is rocking that sh!t hardbody….