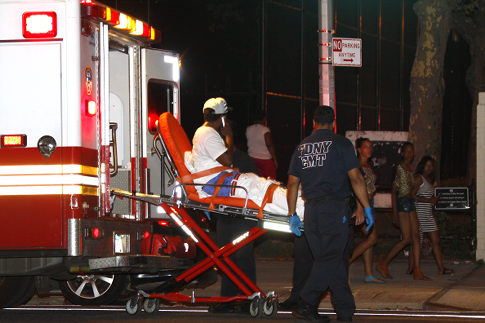 An outdoor Coney Island, Brooklyn gathering turned deadly Saturday night when a shooter killed one young man and wounded another in Kaiser Park.

More than 100 people were partying, rapping and socializing on the park's soccer field a just before 11:30 p.m. when 10 to 15 gunshots rang out and sent parents running for their children, witnesses said.

Shamar Watts, 25, of Coney Island, was shot in the upper torso and was pronounced dead at Coney Island Hospital, police said.

A 19-year-old man was also shot in the leg and was taken to Lutheran Medical Center. He is expected to survive, police said, but did not release his name.

"I heard a shot go right over my shoulder," said a man who was in Kaiser Park during the shooting for a baby shower in a picnic area near the soccer field.

The gunman, "shot all the way till he got to the baseball field and kept shooting," the anxious witness said.

Police were called to control the unruly crowd. Field lights were lit as investigators searched for shell casings on the field, which was left covered with spent bottles of wine, Hennessy cognac and other garbage.

Cops used flashlights to search a playground in the park, which spans Neptune Avenue and 29th to 31st Streets in Coney Island.

Family members of the slain young man, including his mother, embraced and wept outside the emergency entrance to Coney Island Hospital. They declined to comment.


S/O TO MY NI**A CESAR WHO HIT ME UP & ASKED ME TO COME TO THIS SH!T! NOT SAYING IT LIKE THAT! BUT! BOY! I'M I LUCKY I DIDN'T GO! IN THIS RAP SH!T ANYTHING CAN GO DOWN! IF IT'S NOT IN A CONTROLLED ENVIRONMENT I'M NOT F**KING WITH IT! I'VE BEEN IN TOO MANY PLACES WHERE IT POPPED OFF! PLUS A BATTLE IS PERSONAL & NI**AS CATCH FEELINGS ALLDAY! SMFH!