OMG! WOMAN DRIVING DOWN THE HIGHWAY & A SNAKE CRAWLS OUT OF THE ENGINE ONTO THE HOOD! 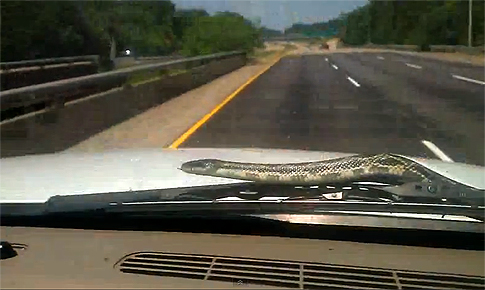 Snakes alive!
A slithering serpent snuck up on a Memphis area family's SUV as they barrelled down a highway.

Rachel Fisher, 26, was at the wheel going about 65 miles an hour as the sizeable snake slid across her windshield. Her husband recorded 2 minutes and 24 seconds of the spectacle as she alternated between girly screams and nervous giggles.

"Ooooh my God. Oh my God. Oh my god," she says, while their three children - Elizabeth, 3, Judah, 2 ½, and Rivers, 4 months - babble from the backseat of their GMC Yukon.

The family was traveling from Fisher's parents' house in Cordova, a suburb east of Memphis, into the city. They had been driving for about 15 minutes, when Tony, a 29-year-old financial planner and church worship minister, noticed their unseemly visitor.

"My husband saw it out of the corner of his eye and did a double-take," the mom told the Daily News. "He whipped out his phone and turns it on and captures the whole thing until it falls off."

The family suspects the snake stole its way into the SUV's engine compartment overnight July 15 and emerged the next day once they got going on Tennessee's Sam Cooper Boulevard.

"We assume the engine just got too hot and it went looking for a cooler place," Fisher said.

"Usually, snakes don't freak me out that much, but I was clenching everything," she said, still laughing a bit nervously about the incident. "It was really weird. I mean, didn't know what the heck it was. We just knew it was a huge snake and the kids were the in back."


LMAO! HE THINKS SPEEDING UP IS GONNA MAKE IT FALL OFF! IT'S CALLED G-FORCE DUMBA$$!