PLAXICO BURRESS SIGNS A 1 YEAR CONTRACT WITH THE JETS FOR $3 MILLION! 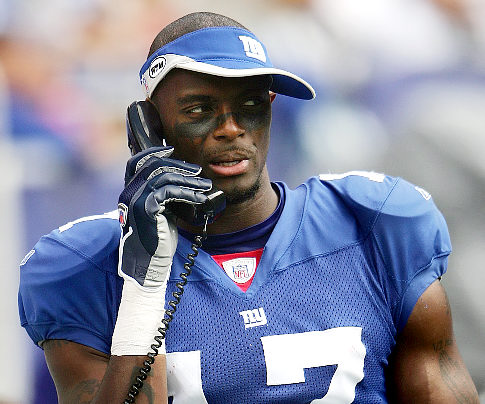 Two days after the Jets lost the Nnamdi Asomugha sweepstakes, Gang Green made a big splash by getting a big target for Mark Sanchez. The team announced that it has agreed in principle to a deal with former Giants wideout Plaxico Burress. The Jets will pay Burress just over $3 million for a one-year deal, a source confirms.

Burress, who has been out of football for two years after he was sentenced to prison after shooting himself in the leg while with the Giants, met with Tom Coughlin on Friday before taking a visit to the Steelers training camp site on Saturday. The Jets reached out to him yesterday to visit its Florham Park, NJ, facility. As of Saturday late afternoon, Burress was still contemplating whether to accept the invitation.

Burress was also believed to have been planning to visit the San Francisco 49ers. However, a tweet from the wideout suggests he's indeed going with Gang Green.

Tom Coughlin said yesterday that the Giants are "possibly" still interested in Burress after he had a "nice conversation" with the receiver during his visit to the team facility on Friday. But Burress ultimately decided to go with the other team in New York.

The Jets, of course, were looking for a No. 2 wideout to play opposite Santonio Holmes, who officially signed his 5-year, $50 million deal on Saturday. The News reported on Saturday night that free agent Braylon Edwards wouldn’t return to the Jets.

Now, Burress will take his place.

This Dummy Shot Himself! Or So He Says! Wink! Wink!