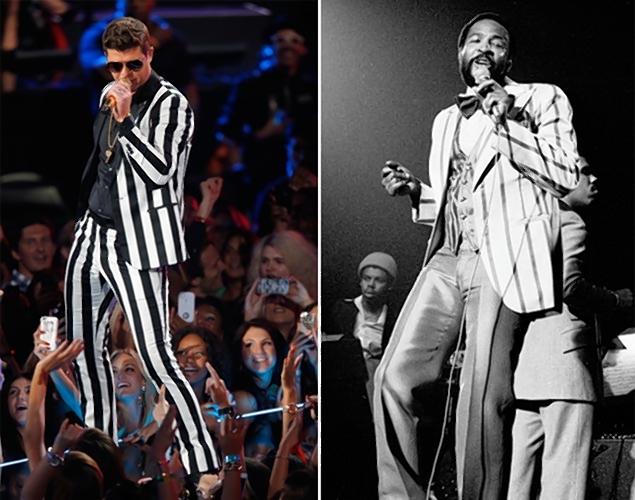 The line that Robin Thicke allegedly crossed with his summer hit has blurred even more.

"Blurred Lines" producers Pharrell Williams and Clifford Harris Jr. appeared at a California federal court in August to request declaratory relief from claims that the song was lifted from Marvin Gaye's "Got to Give It Up."

"Being reminiscent of a 'sound' is not copyright infringement," they stated.

Now, the Gaye family has filed a counterclaim against the singer and EMI's April Music, which is the song publisher owned by Sony/ATV, reports The Hollywood Reporter.

The countersuit concerns the "blatant copying of a constellation of distinctive and significant compositional elements of Marvin Gaye's classic #1 song," something Thicke previously admitted to.

"Pharrell and I were in the studio and I told him that one of my favorite songs of all time was Marvin Gaye's 'Got to Give it Up,'" Thicke said in previous interviews, which the Gaye family uses as evidence in their case.

"I was like, 'Damn, we should make something like that, something with that groove,'" he added. "Then he started playing a little something and we literally wrote the song in about a half hour and recorded it."

According to Billboard, the family of the legendary soul singer also utilized quotes from music critics from The New York Times, Vice, Rolling Stone and Bloomberg Business Week who wrote of the similarities between Thicke's hit and Gaye's classic as another supporting factor in their case.

However, family members of the "Prince of Soul" say it goes beyond Thicke's recent hit and includes other tracks he's recorded like "Love After War," which allegedly sounds similar to Gaye's "After the Dance."

Furthermore, the Gaye's countersuit includes public perception of additional songs "including the similar bridge and identical lyrics from Marvin Gaye's 'I Want You' in Thicke's similarly-themed work, 'Make U Love Me.'"

Overall, they are claiming Thicke has a "Marvin Gaye fixation."

But beyond what the filing is saying about Thicke, the suit is profound in its allegations against EMI calling the label on its reported conflict of interest.

While the family owns the rights the songs reportedly copied, like "Got to Give It Up" and "After the Dance," EMI was assigned to administer and protect the copyrights and according to the suit they did not uphold their end of the deal.

Additionally, the Gaye family denies ever turning down a "six-figure settlement" as previously stated by Williams and Thicke and they claim EMI's chairman accused them of "ruining an incredible song" among other things. They even went as far as to allege that the chairman indicated that the Gayes were the reason why "Blurred Lines" didn't receive an MTV VMA.

"The Gaye Family should not be compelled to remain in this contractual relationship (with EMI)."