LUDACRIS HOPES BATTLE OF THE SEXES MAKES FEMALE VOICES HEARD! WHAT EVER HAPPENED TO SHAWNA? 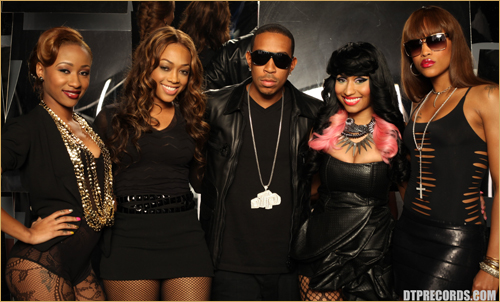 NEW YORK — According to Ludacris, there's just too much testosterone in hip-hop.

So with his forthcoming Battle of the Sexes album, the Atlanta rapper decided to inject what he felt was a much-needed dose of femininity into the discussion.

"It's such a male-dominated industry that I feel like females need more of a voice, so we wanted to hear more of what the hell they had to say," Luda told MTV News about the album concept. "With that being said, I went out and got women from the past, the present and the future — everyone from Lil Kim, Eve, Trina, Nicki Minaj. I got records where I'm talking about women ... and where women are talking back to me."

The rapper wanted to model the album after collaborative LPs Jay-Z and Foxy Brown and the Notorious B.I.G. and Lil Kim once promised but never delivered. With Shawnna's departure from the DTP camp, however, Luda decided to revamp Sexes into an expanded effort.

Monica and Crime Mob's Diamond are among the other females set to participate; Ne-Yo, Trey Songz, Flo Rida and Gucci Mane are also featured on the album.

Ludacris said once he put the call out to the ladies to join in on the project, the responses were overwhelming.

"They were loving it," he said. "It was even better when we shot the 'My Chick Bad' video and the remix. I had all those women on the same set. It was history. They love the fact that someone is trying to get the female voice out there more."

The Battle of the Sexes track list, according to Def Jam: