LOL! SINCE TWITTER EXPOSED LIL WAYNE AS THE WEIRDO HE IS NICKI GIVES HIM SOME TWITTER ADVICE! 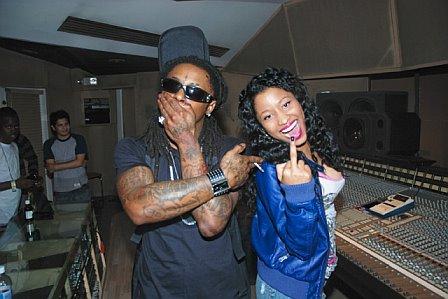 NICKI WITH WACKA FLOCKA FLAME BEFORE SHE HAD ASS & TITTIES: NEW YORK — Lil Wayne is having a tough time with Twitter.

The rapper recently joined the social networking service to much fanfare, quickly amassing more than 172,000 followers.

The prolific MC, however, hasn't exactly tweeted with the same fury with which he released countless mixtapes. But his sparse messages have been received well, for the most part. They typically feature poetic refrains without much context.

"If we are all here for a reason, I'm just visiting," he wrote in one message that's been characteristic of his output.

But a backlash was started by some fans and comedian Lil Duval, who created the topic "#LilWayneDeepTweets." The tagged posts poke fun at the overly philosophical nature of the rapper's messages. As a result, Lil Wayne tweeted that if he wasn't wanted on Twitter he would leave.

Lil Wayne protégé Nicki Minaj, herself a healthy Twitter user, has some advice for the "Lollipop" superstar.

"Less poetry," she told MTV News from the red carpet of BET's "Rip the Runway."

But the female MC urged Wayne not to quit the service, despite the fact that he only has a few days of freedom left; he's set to begin his one-year jail sentence in New York this week.

"We want to hear what you have to say, Lil Tunechi," she said, using Wayne's Twitter handle.

From the looks of things, it doesn't appear that Wayne will give up on Twitter just yet.

About 12 hours after tweeting that he would leave, the rapper began sending messages again.