LL COOL J IS UPSET THAT FOX TRIED TO USE HIS OLD INTERVIEW TO PROMOTE SARAH PALIN'S NEW SHOW! 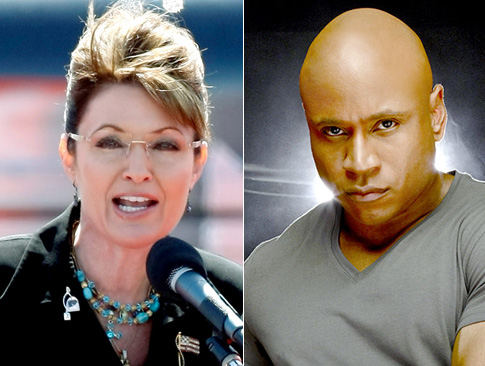 LL Cool J, who had a hit called "Mamma Said Knock You Out," got a segment spotlighting him knocked off Sarah Palin's inspirational new show for the Fox News Channel - after complaining the clip was actually a two-year-old interview being re-aired without his permission.
Less than 24 hours after Fox announced the launch of Palin's series "Real American Stories," LL Cool J, now starring in CBS' "NCIS: Los Angeles," was claiming people were being mislead.

The network's release for the show, included a line reading: "Additionally, rapper and actor, LL Cool J, and the former chairman and CEO of General Electric, Jack Welch, will both speak about their success in this country in a segment entitled, ' In Their Own Words.'"

What wasn't said, however, was that the LL Cool J moment was taken from an interview done with Fox in 2008, where he talks fondly about his grandfather.

"Fox lifted an old interview I gave in 2008 to someone else and are misrepresenting to the public in order to promote Sarah Palin's show. WOW," he wrote on Twitter.

The clip of LL Cool J intended for the show was a minute and eight seconds long. After hearing of his dissatisfaction, Fox programmers pulled the moment from the show.

"‘Real American Stories' features uplifting tales about overcoming adversity and we believe Mr. Smith's interview fit that criteria," FNC head of programming Bill Shine said in a statement. "However, as it appears that Mr. Smith does not want to be associated with a program that could serve as an inspiration to others, we are cutting his interview from the special and wish him the best with his fledgling acting career."

The series, which will air Thursday at 10, includes an interview with a stockbroker who donates much of his money to help kids go to college, and country singer Toby Keith.

The LL Cool J kerfuffle is the latest twist in Palin's rise in the media world. She became a contributor to the Fox News Channel earlier this year and as part of that deal, got an occasional series called "Real American Stories."

Outside of Fox she recently signed a deal with Discovery Networks to be part of "Sarah Palin's Alaska," an eight-part documentary produced by Mark Burnett that will air on TLC.

Discovery paid just under $1 million an episode for the show, which will mean Palin, and Kate Gosselin, two media and blogger lightning rods, will appear on the same cable network.
Of course, the flap over LL Cool J's interview clip will also generate more interest — negative and positive — in Palin's new show launching Thursday.