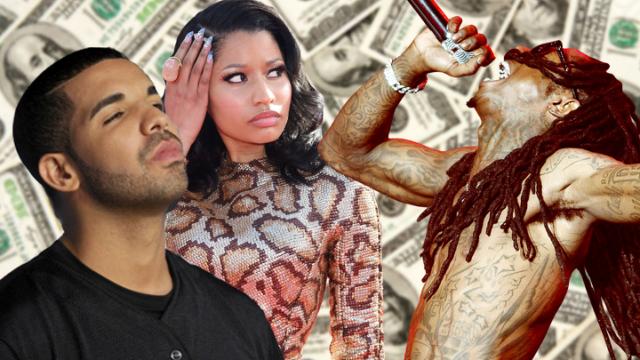 Lil Wayne is bringing a multi-million dollar lawsuit against Universal Music Group, the parent company of Cash Money Records, under which his own Young Money Records is a joint-venture. In the suit, Wayne alleges that Universal withheld tens of millions of dollars in payments to him stemming from the success of his artists Drake, Nicki Minaj, and Tyga.

According to a statement from Wayne's lawyer, at the time Cash Money owed Universal $100 million for advances it had received. As such, Wayne alleges that Universal withheld his portion of the profits from his Young Money artists in order to pay itself back for the debts Cash Money had accrued. This occurred despite the fact that Cash Money only owns 51% of Young Money, with the remainder being held by Wayne directly.

"Ignoring Lil Wayne’s documented ownership interest in the records of these artists, Universal confiscated Wayne’s profits to repay the large Cash Money Records debt for which neither Wayne nor his Young Money Entertainment company has any responsibility," said a representative for his lawyers in a statement. "Universal further deprived Wayne of millions of dollars in SoundExchange royalties owing on account of his ownership of these records."

According to a report from The Hollywood Reporter, Wayne is seeking $40 million. The agreement between Young Money and Cash Money expired last June, and as such, Drake's upcoming album could be subject to political infighting over the profits.

This lawsuit is separate from the $51 million suit he brought against Cash Money's Birdman last year. The pair have gone through great lengths to bring their infighting back under wraps recently, but much remains unsettled in that case as well.

In a statement to Rolling Stone, a representative for Universal said, "These claims are entirely without merit. It should be no surprise that we learned of the lawyer's complaint through the news media. We don't intend to dignify this with further public comment except to say that we will vigorously contest it and that the merits of our case will carry the day."