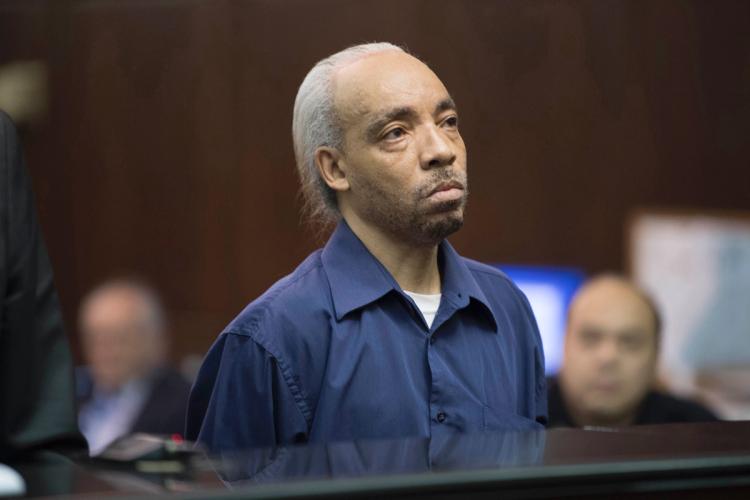 Homophobia sparked a hip-hop icon’s fatal stabbing of a homeless ex-con — who knocked back a final swig of beer before collapsing on a Manhattan street, officials said.

Murder suspect Nathaniel Glover, better known as Kidd Creole of the legendary Grandmaster Flash and the Furious Five, was held without bail Thursday in the murder of John Jolly.

Glover, 57, was walking to work Tuesday night with a steak knife hidden up his sleeve when Jolly approached at E. 44th St. and Third Ave., officials said.

According to Glover, the man asked him “What’s up?” The defendant interpreted the comment as a sexual come-on, said Assistant District Attorney Mark Dahl.

“If he’s hitting on me, he must think I’m gay too,” the prosecutor quoted Glover as saying.

The very thought “infuriated the defendant,” said Dahl. Glover, who had walked past Jolly, doubled back to confront the man. When Jolly spoke in a menacing tone, Glove thought he was about to be robbed — and pulled out the steak knife, plunging the blade twice into the other man’s chest, authorities said.

The mortally wounded Jolly “reaches down, takes a swig of his beer,” said Dahl. “At that point, you see a blood stain emerging in his chest. (He) walks down the street. About a block away, he collapses and dies.”

The entire confrontation was captured on security video, authorities said. Glover said he carried the knife, held on his forearm by rubber bands, to protect himself.

Glover continued to his job as a building handyman and security guard, washing the blood off the murder weapon before bolting from work after 15 minutes, authorities said.

Glover tossed the knife into a sewer grate in the Bronx before cops summoned him to Manhattan for questioning. He was charged with second-degree murder at the Manhattan Criminal Court hearing.

Glover was inducted into the Rock and Roll Hall of Fame with his history-making South Bronx group in 2007. Their hits included the socially conscious “The Message” and “New York New York.”

Jolly had a rap sheet with 17 prior arrests, including a Midtown bust in June for drug possession. He served five years in prison for the 1997 rape and beating of a 42-year-old woman.

The two men had no prior relationship until their deadly showdown at E. 44th St. and Third Ave. Sources said Jolly was drinking before running into Glover — and friends described the victim as a peaceful man who struggled with mental health issues.

“I saw him in the news and it blew my mind,” said Andres Figueroa, 50, who knew Jolly from their time at a homeless shelter on the Bowery. “He was a real quiet dude.

“He’d sit there and watch TV, and that was about it,” Figueroa continued Thursday. “He was a real cool, laid-back black dude. He didn’t mess with nobody.”

“He was quiet,” agreed a 68-year-old man named Olu. “He did have some mental issues, as far as I could tell.”

Shelter resident Charles Dance, 65, questioned the details of the death.

“I don’t believe the story that he was making a sexual advance,” said Dance. “When you get into an argument, sometimes things get out of hand. He never had a violent bone in his body.”

Rapper Chuck D of Public Enemy offered some support for Glover before his murder arraignment.

“I hope all works out with my man @thekiddcreole,” he tweeted. “Conditions of NYC on the homeless render many insane. Conflicts rise but 1 must defend self.”