Justin Timberlake Wants To Play The Riddler In "Man Of Steel" 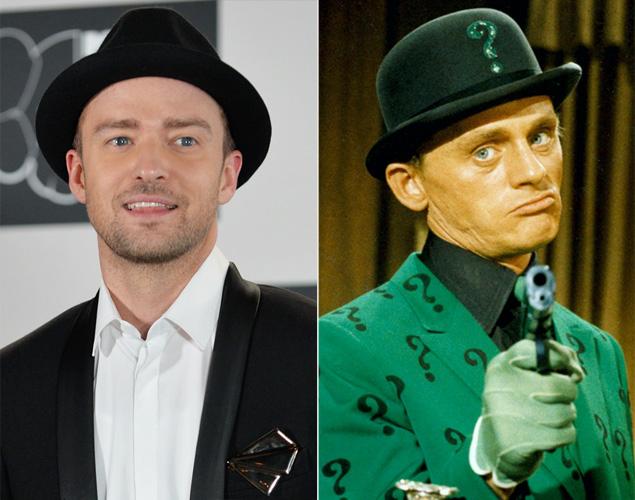 Riddle us this, why don’t the powers that be at Warner Bros. show a little love to Justin Timberlake?

The “Mirrors” singer and occasional actor revealed he wants to be cast in the upcoming “Man of Steal” sequel -- as the nefarious Riddler to Ben Affleck’s Batman.

"I ain't playin' Robin. I have no aspiration to ever be a superhero in a movie,” Timberlake told Fresh 102.7’s Jim & Kim morning show Tuesday.

“ Now villain.... I’ll tell you the villain I want to play more than anything because I grew up loving Batman, funny enough, is the Riddler. The Riddler is my favorite villain.

“The Riddler was like a sociopath,” the 32-year-old star added. "He was proper crazy. So if I'm gonna play crazy, I'm wanna play proper crazy."

But Timberlake did once have aspirations of being a super hero - losing out to Ryan Reynolds for the part of “Green Lantern” several years ago.

"[Timberlake came across] perhaps a little younger than Ryan, a little boyish if you will," “Green Lantern” director Martin Campbell said in 2010.

Even after his critically acclaimed turn in “The Social Network,” industry insiders still don’t know if Timberlake can carry an expensive tentpole movie - or if he can ever appeal to male movie goers (Exhibit A: the box office flop “In Time”) the way he does to female ones in romantic comedies like “Friends With Benefits.”

And it’s unlikely that a villain as campy as the Riddler is going to be a part of director Zack Snyder’s decidedly dark “Man of Steel” sequel, which starts filming in Detroit early next year.

For the time being, Timberlake says he’s just excited to see Affleck in tights, so to speak. The two co-star in the upcoming thriller, "Runner Runner," which hits theaters on Oct. 4.

"Ben Affleck as Batman, I like it," he told Fresh 102.7. "I worked with Ben last summer and I've seen his process. I think he's a brilliant filmmaker. I think he's an extreme talent so he could surprise a lot of people."