Drake Shows His Sensitive Side At Newark's Prudential Center Drake rolled things out slow and steady at his Prudential Center concert in Newark Sunday.

His raps often arrived in a measured flow — sure in delivery, with only fitful upticks to the manic or agitated. His music likewise stressed firm and deep rhythms that barely needed to strain, or kick into high gear, to make an impression.

It’s a relatively low-key approach for someone who's sitting high atop the hip-hop heap. The Canadian rapper has the genre's fastest-selling album of the year with “Nothing Was the Same.” Even so, both Drake’s CD and his show made sure to balance typical hip-hop chest-puffing with some of the qualities that set him apart from the start: sensitivity and nuance.

Even the name of Drake’s current roadshow poses a tentative question — “Would You Like a Tour?”

The awkwardness of the title reflects a conflict in the raps that dominated the night.

In his opening song, “Tuscan Leather,” Drake claimed he’s the equal of his mentor (Lil Wayne). But by the next piece, “Headlines,” he was ruminating over the past insecurities that led him to exaggerate his accomplishments.

Drake's live presentation also straddled the line between the modest and the grand. He featured a gigantic, movable catwalk, able to lift him to the very top of the arena. At the same time, the star dressed in a nondescript cream outfit.

That didn’t quiet the screams of the young females in the crowd. Drake, 27, remains a certified media heart-throb, as well as a teen idol. But his audience at Prudential Center bridged both genders and had (somewhat) older as well as younger fans.

The music they heard Sunday could be samey in tone and pace. But Drake lent the show variety with his periodic singing.

It's a honied drone that sticks to the lower registers to signal reflection. And it pairs well with the dreamier textures of the music. The slow-burn intensity of the music, as well as the star's vulnerability, may be rare in rap but they’re not unprecedented. Kanye pioneered that approach on his “808s and Heartbreak” CD and tour. Drake has been viewed as a kind of unofficial Kanye protege, though his latest album has greatly outsold his mentor’s. More importantly, Drake has brought his own character and flow to the approach, and, in the end, that carried him on both the CD and onstage. 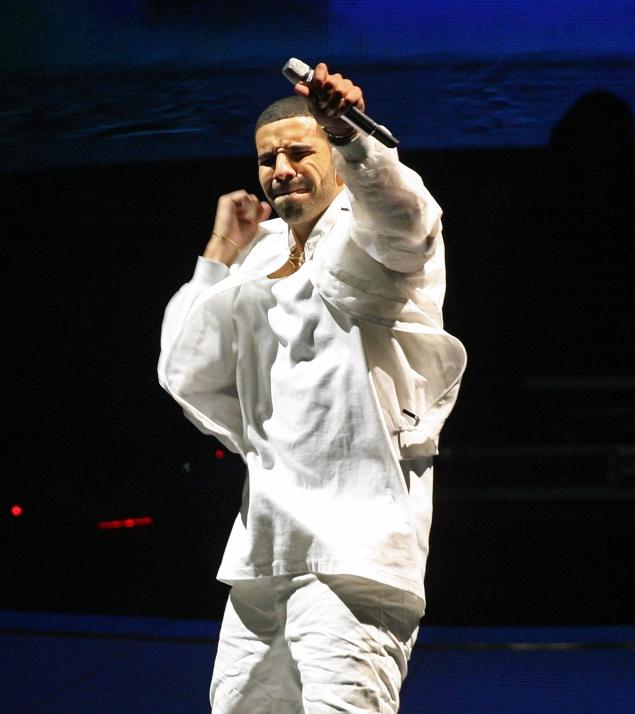