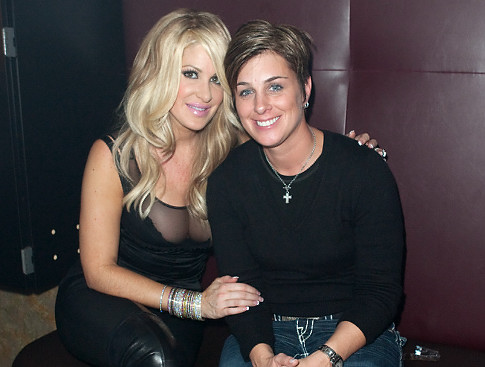 Just one week after admitting she is in a lesbian relationship, "Real Housewives of Atlanta" star Kim Zolciak is backtracking and says it was just a "one-time deal."

Zolciak, 31, spoke to "The Bert Show" on Q100 Atlanta Wednesday morning to set the record, er, straight about her rumored romance with DJ Tracy Young, the woman behind the remix of the reality star's one-hit wonder, "Tardy for the Party."

"It was a one-time deal and it's just blown up," Zolciak told the radio show, according to UsMagazine.com. "We spent a ton of time together. And, you know, things happen, that's it."

"It didn't take a whole bottle of wine," the mother of two added. "I was clearly aware of what I was doing ... I had a connection with her for sure. It is what it is."

Last week, Zolciak spoke to Life & Style about her relationship with Young.

"There were sparks, but [physically] it was a gradual situation," she had said. "Tracy made the first move. Our first kiss was passionate and exciting."

Despite previously saying she broke up with her on-again-off-again mystery boyfriend before meeting Young, Zolciak claims that she is still involved with the man dubbed "Big Poppa."

Saying that only two people knew about their tryst, Zolciak suggested that Young exaggerated their short-lived fling to the press. She has since cut all ties with the DJ.

"I said to her, 'Look, wow, settle on down. It's not good that we communicate. This has blown up like crazy and I don't ever really wanna talk to you again," Zolciak said. "I don't appreciate all this stuff."

Someone who has also disapproved of the media attention is Zolciak's 13-year-old daughter, Brielle.

"It's hard already in middle school. I'm comfortable talking about it. I'm not embarrassed or ashamed, [but] I have kids and a family," the busty blond said. "I adore [Young], she's a great girl, but there's not even going to be a friendship. There just can't be."