ERYKAH BADU GETS NAKED IN HER NEW VIDEO TO PROMOTE INDIVIDUALISM OR MAYBE WHEN A LIL WAYNE FEATURE CANT GET YOU HOT GETTING NAKED ALWAYS WORKS! 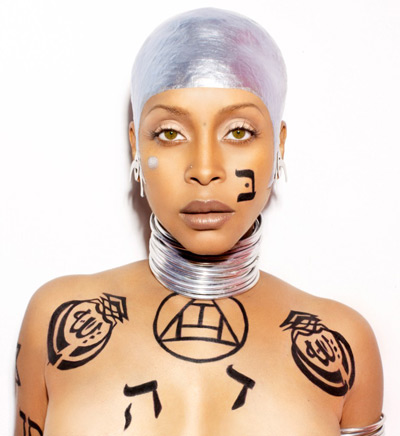 Inspired by Matt & Kim's "Lessons Learned" video where the group undresses in Times Square, Badu disrobes as she walks down a busy street midday. The passersby aren't video extras, but real life unassuming pedestrians who mainly ignore her, save for a man who picks up some of her clothes, and a woman who stares at her while holding the hand of a toddler boy.
By the time Badu reaches the infamous grassy knoll where Kennedy was killed, she is completely nude. A gunshot is heard, her head cocks back, and her limp body falls to the ground. The words "group think" bleed from her head in blue ink.
"Group think that's like a form of thinking that causes you to bury what you really feel inside to please the group so you won't be ostracized by the group," Badu told the Wall Street Journal. "It's a comfort zone that we create for ourselves, and I go outside of that comfort zone."
As Badu's body lies on the ground, she speaks in a narrative voice to explain the message. "They play it safe. Are quick to assassinate what they do not understand," Badu says in the voiceover. "This is what we have become. Afraid to respect the individual."
The reaction online has mostly been positive. "Erykah badu constantly causes one to question things...that's why she's amazing," RuthLovely commented on Twitter.

One viewer, however, considers Badu's public nudity indecent. "Obscene? No. Indecent? Definitely." Fred Sands wrote on Badu's fan site Erykah-Badu.com. "No permit to tape + ‘straight guerilla cam' + no consideration of kids at a tourist spot = extreme arrogance, ignorance and dishonoring the memory of a beloved President."
John Crawford, president of the nonprofit group Downtown Dallas, described the video as "in poor taste and in poor judgment," the Dallas Morning News reports.
After taping the video, Badu admitted feeling some anxiety. "There were children there," Badu said via her Twitter page Fatbellybella. "I prayed they wouldn't b traumatized." She did talk to her three children and their fathers beforehand and received their support.
"'Window Seat' is a song about being liberated from I think mostly ourselves," Badu told the Wall Street Journal. "In the video I shed a lot of emotion, a lot of baggage by way of shedding clothing. I do this in the middle of a busy street which is totally probably something that is not accepted in society, thus the definition of not conforming to what society would expect you to do."