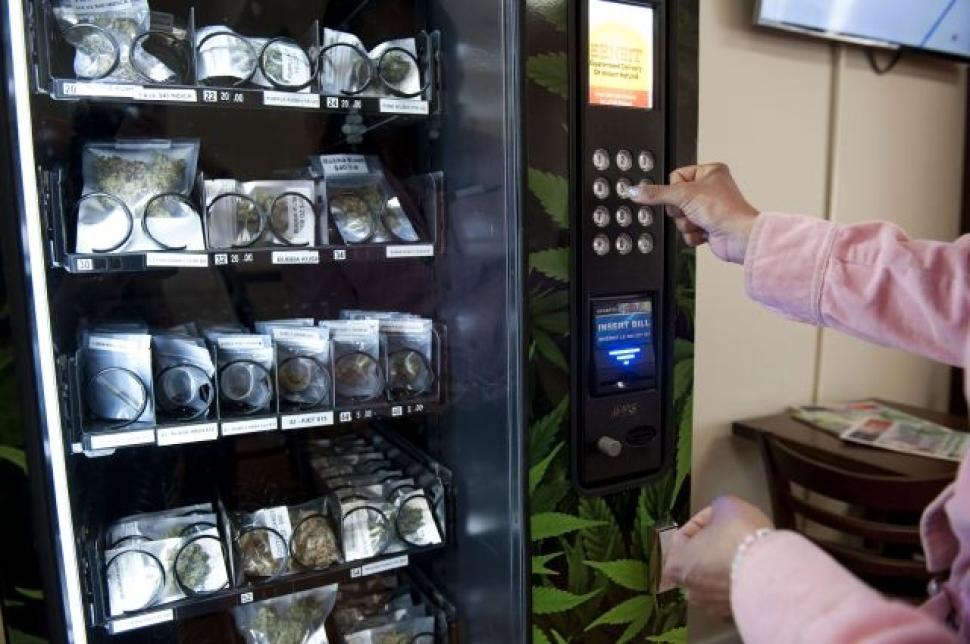 The vending machines at a Vancouver storefront look ordinary -- but instead of spitting out gum or snacks, for a few coins they deliver medical marijuana.

For Can$4, the brightly lit "gumball" machine drops a plastic ball filled with the so-called "Cotton Candy" variety of the drug. The "Purple Kush" option costs Can$6.

But the really good stuff, said proprietor Chuck Varabioff, is "Pink Kush," available from another machine the size of a fridge that delivers a wide range of marijuana in plastic bags heat-sealed for hygiene.

His British Columbia Pain Society is one of about 400 pot stores -- which call themselves medical marijuana dispensaries -- in the western Canadian city.

They're all part of a booming medical marijuana industry that operates in a legal gray zone since a federal court ruling recently overturned Ottawa's latest attempt to regulate its distribution.

Under the new regulatory regime, as of April 1, some 30,000 home-based growing operations and distributors across Canada are to be replaced by fewer but larger commercial operations.

Many of the smaller growers and distributors, particularly in westernmost British Columbia province, however, refused to step aside.

The drug is illegal outside of the new regime, Vancouver police said in March, but it's not one of the force's top priorities, which are instead focused on violent and predatory drug traffickers, gangs and hard drugs including cocaine, heroin and methamphetamine.

"Medical marijuana dispensaries operating today in Vancouver do not meet these criteria," the police warning said.
Official city policy -- and to a lesser degree British Columbia government policy -- tackles all illegal drugs as a health instead of a criminal issue.

The use of marijuana for medicinal purposes was effectively legalized in Canada in 1999, and its use has been expanded through a series of court challenges.

Calls are now growing to also decriminalize recreational marijuana use -- which Canada has prohibited since 1923.
- 'Pain is gone' -
The medical dispensaries are relatively new.

For generations, pot has been produced and sold here as a street drug, including by gangs, and fueled a vibrant underground economy.

A decade-old study by an economist for the libertarian Fraser Institute think tank estimated the street value of the weed at Can$7 billion a year in British Columbia.

Back at the British Columbia Pain Society, customers have to be 19 or older, and are required to show a signed form from a medical professional -- such as a physician or naturopath -- to enter the fenced area where the marijuana is sold.

They can take their purchase away, or smoke it at a large table with an air filtration system.

Justin Johnson sat at the table and inhaled deeply from a bong -- a glass pipe contraption.

"I feel stoned, slightly euphoric, a little anxious," he said with a little smile.

"And immediately all the pain I have is gone."

Johnson said he has relied on marijuana to reduce pain since injuring his back lifting a heavy box of potatoes in his former job as a chef.

He now works as a pot advocate and is currently setting up a new storefront for the British Columbia Pain Society.

British Columbia Pain Society director Varabioff said the shiny new vending machines and a second storefront for the business are just the start of his big plans.

He hopes to install marijuana vending machines in nursing homes and medical clinics.

Varabioff said he's a businessman who does not smoke pot because he has asthma, but supports its medical use after watching an elderly relative suffer in pain.

Put ya money in & watch kush pop out! Like this on'em