ARE THEY SERIOUS? HOW CAN THEY BLAME HIP HOP FOR WHAT THIS STUPID B!TCH DID? 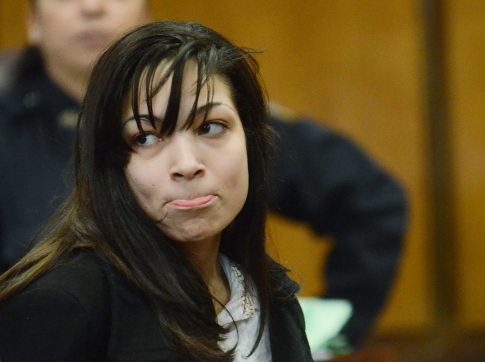 I USUALLY F**KS WITH THE NY DAILY NEWS! BUT THIS ARTICLE RIGHT HERE MADE ME DISGUSTED! HOW CAN THEY BLAME HIP HOP AS A CULTURE FOR WHAT THIS STUPID B!TCH DID? IT WAS HER CHOICE TO CARRY & SELL GUNS & DRUGS FOR HER BOYFRIEND! SHE WAS LIVING HIGH OFF THE HOG WITH THAT DRUG MONEY! IF THEY WOULD LIKE TO BLAME SOMEBODY FOR THIS GOOD GIRL GONE BAD! BLAME SOCIETY & POVERTY! NOT F**KING HIP HOP! GET THE F**K OUTTA HERE! BUT SERIOUSLY READ THE ARTICLE THIS A$$HOLE WROTE BELOW & CLICK ON THE SOURCE LINK TO GO GIVE HIM A PIECE OF YOUR MIND!


ARTICLE FROM THE DAILY NEWS:
Afrika Owes was a 17 year old with everything going for her. A precocious child growing up in Harlem, her talents were not deferred but frequently rewarded: She attended basketball camps, sang in the choir at Abyssinian Baptist Church, won a poetry contest and even earned a scholarship to the elite Deerfield Academy in Massachusetts. A savvy and ambitious student, she had her sights set on either NYU or Columbia for college, or perhaps the University of Pennsylvania if things didn't work out in New York. She had options, and she knew it.

Despite all that, Owes made headlines last weekend not for her intellectual achievements but for something else entirely - her unwavering loyalty to a nihilistic street culture that is devouring young blacks. Owes was arrested for running drugs and guns on behalf of her incarcerated boyfriend, Jaquan Layne, a member of the "137th Street Crew," a violent street gang that sold crack not too far from the Abyssinian Church.

Afrika seems to have been many things: She was "real," she was "cool," she was "down" and most likely she was a victim - but sadly she was not unpredictable. Though I don't know this teenager specifically, I know a good deal about the culture that has shaped her generation and mine, telling us repeatedly that black authenticity is inextricably linked to street credibility. Allow me to extrapolate.

I can imagine a 12-year-old Afrika, just as she's becoming aware of boys, singing along in her bedroom to a seemingly innocuous song like Destiny's Child's "Soldier":

I need a soldier

That ain't scared to stand up for me

If you know what I mean

If his status ain't hood

I ain't checkin' for him

Betta be street if he lookin' at me

I need a soldier

That ain't scared to stand up for me

And he betta be street

I can imagine that young girl realizing that the college-bound boys at her school aren't nearly as appealing as a young turk like Layne.

Fast forward five years, and I can imagine Owes taking the subway down to the New York Public Library on 42nd Street to hear the famous black professor from Princeton, Cornel West, live in conversation with the rapper Jay-Z. Perhaps she has recently read in Rolling Stone that Jay-Z is one of the President's favorite artists; perhaps that was something she already knew.

I can imagine Afrika listening as West asks Jay-Z, the ex-crack dealer made good millions of times over, to expound upon the similarities between, of all things, "the hustler and the freedom fighter." I can hear the applause as Jay-Z responds, "the difference is the level of maturity." I can envision the pretty girl with a bright future leaving the talk persuaded that maybe, just maybe, there is something noble about the crack dealer's calling.

I can see her back home in her bedroom, on the phone with her boyfriend at Rikers, assuring him that she will stay true to the cause.

These are only my imaginings. Maybe it wasn't like that at all. Maybe Afrika is simply a bad kid, nothing more or less. The fact remains, though, that the youth culture she has grown up in valorizes the kind of man she fell in love with while rationalizing the disastrous decisions she made to prove herself to him. At the same time, the very public leaders who are in the strongest position to refute this folly more often than not make careers out of contorting themselves to justify it.

I have known several Afrika Owes in my life. During the second semester of my senior year at Georgetown, one of my classmates, the product of a posh New England boarding school and a star tennis player, was expelled just weeks before graduation. As my friends and I scratched our heads trying to figure out what infraction he possibly could have committed - cheating on an exam? driving drunk? - details of a different sort soon emerged. It turned out that our talented classmate led a dual existence. Even as he burned the midnight oil in the library and ate with us in the cafeteria, he never stopped being a soldier. He toted a handgun and sold drugs for a D.C. crew. One evening, he burst into the dorm room of a student who owed him money, gun in hand, looking to collect the debt.

Responding to the question, "Who gives us our values?" Albert Camus answered with a question: "Don't you believe we are all responsible for the absence of values?" As another Black History Month draws to a close, we must face one of the great tragedies of our time: After so many obstacles have been overcome, our limitations are being chosen deliberately.

It is at our own peril that we fail to realize that ideas matter, that what we put inside our heads matters and that the values we choose to live by make all the difference in the world.

Williams is author of "Losing My Cool: How a Father's Love and 15,000 Books Beat Hip-Hop Culture."