Rapper 50 Cent is on the hook for a lot of dollars.

Jurors in a civil suit against the entertainer by a Florida mom who says he humiliated her by posting a sex tape of her online deliberated for over an hour on Friday before socking him with a $5 million verdict — and he may have to pay many millions more.

The mom, Lastonia Leviston, broke down in tears while clutching the hand of her lawyer’s wife as the jury returned their verdict against the rapper - $2.5 million in damages for violating her civil rights for using her image without her permission, and $2.5 million for intentional infliction of emotional distress.

Those figures could be multiplied next week, when the jury weighs punitive damages against the “Get Rich or Die Tryin’” star.

The rapper, whose real name is Curtis Jackson, didn’t show up to testify at the trial, which started June 15th, and he wasn’t in court for the verdict. Manhattan Supreme Court Justice Paul Wooten told the jurors they were allowed to take note of his absence — which was made even more notable because he was in New York at the time, celebrating his 40th birthday.

The judge ordered Fitty’s lawyers to turn over his financial net worth statements and his tax returns for the last five years to help the jury decide next week how large the punitive damages award should be. The “Candy Shop” rapper might also have to testify about his finances.

Wooten told jurors the amount of punitive damages can be large enough that it not only punishes the filthy rich Fitty, but deters others “from indulging in similar conduct in the future.”

The superstar — who has his own record label and several lucrative endorsement deals, in addition to his successful rapping and acting careers — has a net worth that’s been estimated to be between $150 to $500 million.

In his closing argument, Leviston’s lawyer, Philip Freidin, had urged the panel of four women and two men to hit the rapper with a $20 million judgment for his humiliation of the mother of two.

He said that Fitty had used the video as a tool to drive up his web traffic by dissing rival rapper Rick Ross, who fathered a daughter with Leviston. 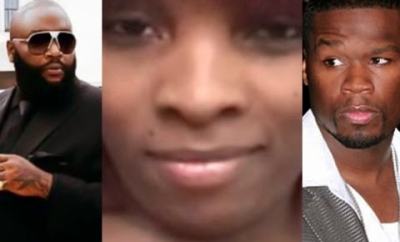 “It was like someone had just took a knife, stabbed me in the heart, twisted it and took it out,” a teary Leviston testified during the trial.

Jackson’s lawyer, James Renard, told jurors his client had gotten the private tape from Murray, who’d assured him that Leviston was fine with the explicit video going online.

In a videotaped deposition that was played for jury, Fitty said he didn't think he needed Leviston's permission to use the tape because Murray said she was "cool with it."

"This whole fiasco was precipitated by a pack of lies by Maurice Murray," Renard said. Jackson's side described the tape as a satirical piece, "although adult rated," that had been aimed at Ross.

Freidin described it as "an attack" - an assault he said continued during the trial, with the defense using a "blame the victim" strategy that included delving into an arrest in her twenties on fraud charges and a brief stint as a topless dancer.

Fitty is expected to appeal, but the lawsuit has already been costly for him - he racked up $400,000 in legal fees with the law firm that was defending the case before it went to trial, court papers show.

"We are disappointed in the verdict, but very appreciative of the service of the jury and the court," said one of his current lawyers, William Brewer.