1 HELL OF A RIDE! 8 YEAR OLD BOY SURVIVES BEING SUCKED INTO A TORNADO! 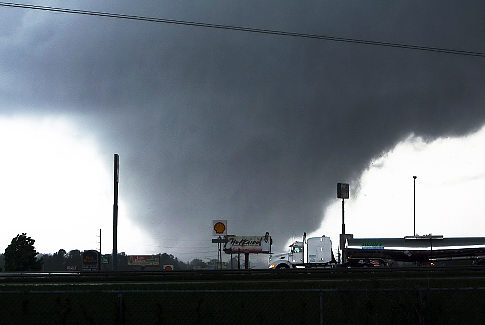 His house is a pile of rubble and he's in the hospital, but Alabama dad Reginald Eppes considers himself lucky - after his 8-year-old was sucked into a tornado and survived.

It happened early Wednesday when howling winds lifted Reginald Jr. off his top bunk bed and into the swirling darkness.

"I was reaching up for him, but my hands never made it. The walls crumpled like paper, and he just went with them," Eppes, 35, told the Daily News from Regional Medical Center in Tuscaloosa.

"Like someone had him on a string and snatched him away real quick."

The Coaling, Ala., dad said he quickly threw his body over 6-year-old James-Peter while his wife shielded their 4-year-old boy. They prayed in a huddle as the rain soaked them.

"It was like a nightmare. I wasn't sure exactly what was happening," he explained. "I just held on to what I had and asked God for protection."

He believes he was granted a miracle.

"I looked up and saw a silhouette, his little shadowy figure walking back over the debris," Eppes recounted. "It was wonderful. You can't explain the relief."

The boy had a gash on his neck and bumps on his head, but a CT scan was negative and doctors found no internal injuries.

"He said it was like he was floating in the air and then just floated back down," said the grateful dad, who also suffered a collapsed left lung.

As Eppes recovered Friday, President Obama toured the heart of Dixie and pledged "maximum federal help" for the deadliest tornado outbreak since the Great Depression.

"I've never seen damage like this. It's heartbreaking," Obama said as he spoke with stunned Tuscaloosa residents amid mountains of debris, overturned cars, downed power lines and uprooted trees piled like matchsticks.

The death toll from Wednesday's devastating string of tornados rose to 318 yesterday and is expected to climb higher.

The outbreak is now considered the most deadly since 1932, when 332 people lost their lives, all in Alabama.

Officials said 228 people were confirmed dead in Alabama while 33 perished in Mississippi, 34 in Tennessee, 15 in Georgia, five in Virginia and one in Kentucky.

New York-based Red Cross volunteers quickly hopped on planes to pitch in with the region's long road to recovery.

"We're trying to prevent PTSD by showing them how to take care of themselves," Queens-based mental health counselor Hun-Jue Luu, 46, told the News. "The challenge is to get them to calm down and go back to their previous life."