MAN ON HIS WAY TO PRISON STOPS BY HIS MOTHER'S GRAVE & SHOOTS HIMSELF IN THE HEAD! 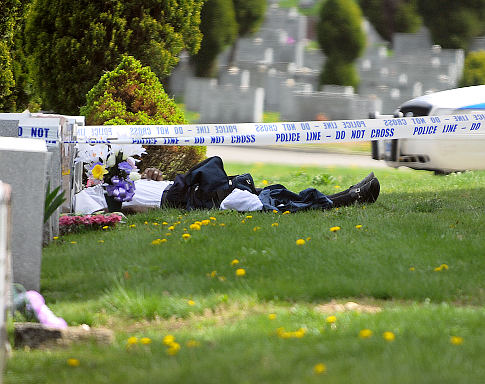 A crooked Brooklyn doctor about to report to a federal lockup stopped first at his parents' gravesite, pulled out a gun and killed himself Friday.

Orthopedic surgeon Gregory Perrier, 46, pleaded guilty three years ago to filing phony bills and was due to turn himself in to serve a one-year sentence at noon.

He asked his lawyer, Al Walker, to take him to a cemetery so he could visit his parents' grave on the way to the Otisville Federal Prison in Orange County, a police source said.

When they arrived at Cypress Hills Cemetery on the Brooklyn-Queens border, Perrier fatally shot himself in the head, the source said.

He fell to the ground, face up, his left hand on his chest. There was a sports coat on his lap and a bouquet of mixed flowers at his side.

Near the Dix Hills, L.I., home where Perrier lived, neighbors were stunned.

"He's a good man, a well-respected man," one said. "I know he was having some problems but to think it would come to this is just something else all together."

Perrier, who worked out of a Flatlands office, "got unfortunately caught up" in fraud with a colleague, Sapone said.

The judge in the case, John Gleeson, twice allowed Perrier, then awaiting sentencing, to travel to Haiti last year to help victims of a devastating earthquake.

Perrier was of Haitian descent and spoke Creole and French.

"He went and performed surgeries and helped the poorest of the poor," Sapone said.

"He repaired people's lives and limbs and was a tremendous asset to that suffering population," the lawyer said

In a posting on the website for a Haitian hospital last year, Perrier spoke about his work for the Red Cross on a Navy hospital ship.

"I have this burning desire of helping my fellow haitians," he wrote.

DAMN! THAT'S CRAZY! HE RATHER DIE THAN GO TO JAIL!