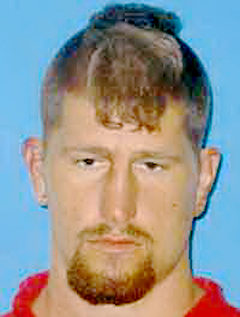 A California judge upheld charges of murder against a mixed martial arts fighter on Friday after the man allegedly cut the victim's heart out of his chest.

Mixed martial arts fighter Jarrod Wyatt, 26, was reportedly under the influence of psychedelic drugs when witnesses said he and his sparring partner, Taylor Powell, became preoccupied with the notion that the end of the world was near and that there would be a final struggle between God and the devil, the Times-Standard reports.

Del Norte County Police Sgt. Elwood Lee, who responded to the incident early March 21, said that Wyatt told him at the scene that he saw the devil in Powell's face and that "'Satan was in that dude.'" He allegedly cut an 18-inch hole in Powell's chest, removed his heart, cut his tongue off and removed a majority of Powell's face.

Lee also said that Wyatt admitted he had cooked the body parts in a wood stove at the Klamath residence because he thought that Powell was still alive and that he needed to "stop the devil."

Detective Ed Fleshman, who testified that he spoke with Wyatt in a holding cell later that morning, said that Wyatt told him that he, Powell and two other friends had drunk hallucinogenic mushroom tea prior to the incident.

When one friend, Justin Davis, tried to leave the scene, Wyatt reportedly tried to stop him, saying that a tidal wave was coming. Davis left to go to nearby Crescent City but returned later to get his dog, when he saw a struggle ensuing in the living room and proceeded to call 911.

Wyatt's ex-girlfriend, Billy Jo Bailey, was also at the scene and said that she noticed a change in Powell's behavior after drinking the tea. Powell reportedly told Wyatt "You wanna f---ing die" three times before the two started to fight.

In addition to counts of aggravated mayhem and torture, Wyatt faces a first-degree murder charge in the incident. Whether the murder charge will stand, however, depends on premeditation -- whether Wyatt acted with "malice aforethought."

James Fallman, Wyatt's defense attorney, argued that Wyatt was having a psychotic break and therefore had no control over his actions.

"My client was trying to silence the devil," Fallman said.

However, prosecutors argue that the act of removing Powell's heart, tongue and face took enough time to prove evidence of intent.