CELINE DION IS PREGNANT WITH TWINS! 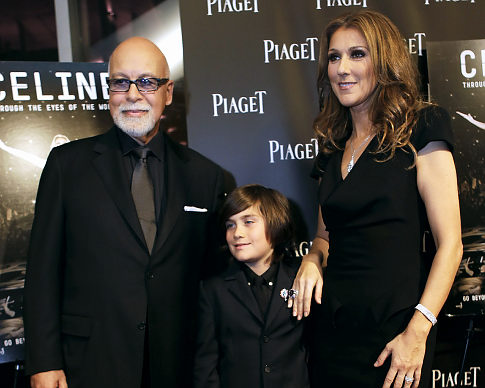 Pop queen Céline Dion is pregnant with twins after a long struggle to conceive and less than a year after having a tragic miscarriage.
The 42-year-old Canadian super star, who has a 9-year-old son, is 14 weeks' pregnant, her husband said Sunday.

"She was hoping for one baby and the news that we are having two is a double blessing," Dion's husband, René Angelil, told People magazine.

The singer and her 68-year-old husband are toasting their success after undergoing six in-vitro fertilization attempts.

In addition to in-vitro treatments, Dion underwent acupuncture to bolster her chances of having a baby.

The couple will not learn the gender of their twins until next month, Angelil said.

Dion and Angelil, who doubles as her manager, have a 9-year-old son, René-Charles, also the result of in-vitro fertilization.

The five-time Grammy-winning entertainer - whose hit songs include "My Heart Will Go On" and "Because You Love Me" - spoke in February on the "Oprah" show of having a miscarriage last year.

"It's life. You know? A lot of people go through this, but it's not being told because it's not in the newspaper," Dion told Oprah Winfry.

News of her miscarriage came six months after she publicly announced in August 2009 that she was pregnant.

"I will be the happiest one to tell you when I'm pregnant," she told Winfry. "And if not, I'm the luckiest artist, especially wife and mother of a wonderful son. So I'm glad."

Earlier this month, Dion told the Web site Celebritybabyscoop.com that she would not announce she was pregnant until she was far along.

"I don't want to talk about it so much because I'm superstitious, but I know people have been very wonderful for us and praying for us," she said at the time.

"Once you live in show business and everything spreads out so quick and every pregnancy you have to wait three months to make sure it's all okay and it's nerve racking," she added.

"We're not getting any younger and you always think it's your last chance, you're last try."