Wtf! Jury Finds George Zimmerman Not Guilty On All Counts In The Death Of Trayvon Martin 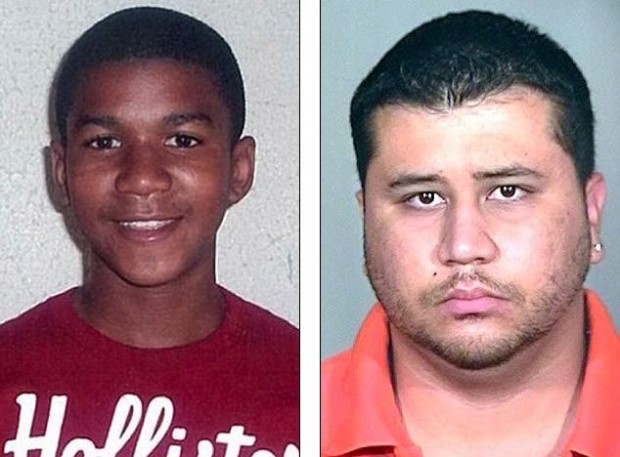 SANFORD, FL -- A jury has acquitted George Zimmerman of second-degree murder in shooting of Trayvon Martin.
Zimmerman, 29, was charged with second-degree murder but jurors also had the options of finding him guilty of manslaughter or not guilty. He pleaded not guilty, claiming he shot the 17-year-old Martin in self-defense. He was found not guilty on all counts.

Jurors were being sequestered, and their identities are kept anonymous -- they are identified only by number.

As jurors deliberated for a second day, there was little understanding between two camps assembled to support Martin and Zimmerman outside the Seminole County Courthouse.

"He deserves some respect and appreciation," Casey David Kole Sr., 66, shouted about the former neighborhood watch leader. "It's a tragedy."

Patricia Dalton, 60, yelled back: "It's a tragedy that could have been avoided!"

Dalton, like most of the people at the suburban Orlando courthouse, says she's there in support of the family of Trayvon Martin, the 17-year-old black teen from Miami who Zimmerman fatally shot last year.

The supporters stayed peaceful for most of the day until in the afternoon when sheriff's deputies had to separate a Zimmerman supporter from a pro-Martin demonstrator after a heated exchange. There was no physical contact made and no one was arrested. Saturday night, two men who got into an argument left voluntarily after talking with sheriff's deputies.

Others remained calm. Two Orlando sisters, dressed in colorful African-print clothing and walking on stilts, sang "Lean on Me" with the crowd as a man strummed a banjo and people waved signs.

In Saturday's strong Florida sun, some people at the courthouse wore hoodies, as Martin had when he died. One woman lay in the grass, her arms spread, in a re-creation of Martin's death. Those in the smaller pro-Zimmerman camp held small signs, saying things like "We love you George" and "George got hit you must acquit."

Joseph Uy of Longwood was among an even smaller group: the few who said they had no opinion on whether Zimmerman was guilty. He said he came because he was "just curious."

"I'm neutral," he said, while cradling his three tiny Chihuahuas in his arms.

By mid-afternoon, people rallied in the heat and chanted slogans as a looming thundercloud threatened a downpour.

"Justice for Trayvon," some shouted. Others yelled, "Convict George Zimmerman."

Police and civic leaders have pleaded for calm in Sanford and across the country after the verdict.

"There is no party in this case who wants to see any violence," Seminole County Sheriff Don Eslinger said. "We have an expectation upon this announcement that our community will continue to act peacefully."

In New York on Saturday, the Rev. Al Sharpton said that no matter the verdict, any demonstrations that follow it must be peaceful.

"We do not want to smear Trayvon Martin's name with violence," the civil rights leader said. "He is a victim of violence."

The Rev. Jesse Jackson had a similar message. He tweeted that people should "avoid violence because it only leads to more tragedies."

Benjamin Crump, an attorney for Martin's family, said the parents are emotional but doing as well as expected as they await a verdict.

"(Jurors) staying out longer and considering the evidence and testimony is a good thing for us arriving at a just verdict," Crump said.

On Saturday morning, Martin's mother, Sybrina Fulton, shared on Twitter what she called her favorite Bible verse: "Trust in the LORD with all your heart and lean not on your own understanding; in all your ways submit to him, and he will make your paths straight."

That's some grade A bullshit