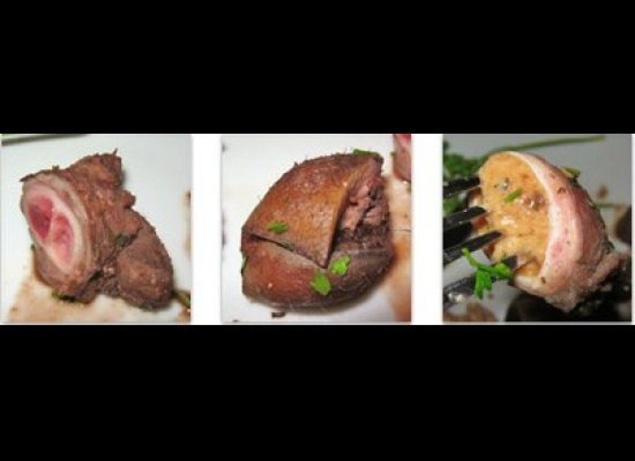 Japanese investigators are looking into whether a demented chef broke the law when he cooked his severed genitals and served them to five dinner guests.

The guests at the May event knew they'd be dining on the chef's private parts - in fact, they paid $250 for the pleasure.

Chef Mao Sugiyama had his penis and testicles removed by a surgeon in March and kept them in his freezer for two months before cooking them at the exclusive Tokyo gathering.

Some 70 people attended the dinner in the city's Suginami ward, which opened with a short piano recital.

Five diners then tucked into Sugiyama's sautéed genitals — served with a side of button mushrooms and parsley — while the others ate beef or crocodile meat.

Tokyo police began their probe after the local mayor complained that it was obscene.

"Many residents of Suginami and elsewhere have expressed a sense of discomfort and feeling of apprehension over this," Suginami Mayor Ryo Tanaka said in a statement Monday.

Sugiyama, a painter in his 20s who describes himself as "asexual," announced the dinner in a tweet on April 8.

"I am offering my male genitals (full penis, testes, scrotum) as a meal for 100,000 yen …Will prepare and cook as the buyer requests, at his chosen location," the tweet said.

"The organs were surgically removed at age 22. I was tested to be free of venereal diseases," it said.

In later tweets, he said he took pains to make sure the dinner complied with Japanese food safety and medical waste regulations.

Meanwhile, the five eaters signed a waiver saying Sugiyama wouldn't be held responsible if they got sick after the meal.

Photos from the event showed Sugiyama in a white frock and chef's hat, standing over a portable gas burner and slicing up the organs in front of a roomful of curious diners.

According to some reports, diners said the meal was rubbery and tasteless.

It gives new meaning to "eat a d**k" & atleast we know how it taste now thanks to these fools!