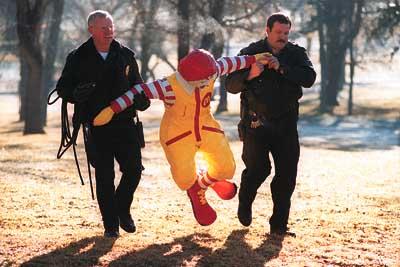 ALOHA, Ore. – An Oregon man spent Memorial Day in jail after dialing 911 to complain that a McDonald's worker was rude and didn't give him an orange juice he ordered. Raibin Osman was accused of improper use of the emergency telephone number.

The Oregonian newspaper reports that the 20-year-old bailed out of the Washington County Jail on Tuesday and could not be reached for comment.

Sheriff's Sgt. David Thompson said Osman ignored deputies who told him the emergency number isn't to be used for straightening out fast-food orders.

A McDonald's employee also called 911 during the incident to complain that Osman and the people with him were blocking the drive-thru lane and knocking on the restaurant windows.