WOW! THAT WAS THE LINE TO BUY TAX FREE GUNS ON BLACK FRIDAY! 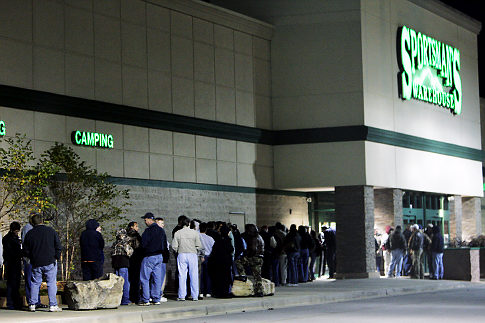 COLUMBIA, S.C. - Happy holidays from South Carolina. Pass the ammunition.
The Black Friday frenzy in parts of the Palmetto State was not about flat-screens, cameras or notebooks. It was all about guns.

Dozens lined up in the pre-dawn chill for a shot at a deal on handguns, shotguns, rifles and bullets.

"I'm here for a pistol," said one shopper, dressed head-to-toe in camouflage outside Sportsman's Warehouse in Columbia, S.C., for the 48-hour tax-free holiday, dubbed the Second Amendment Sale. "I want the Ruger .380."

It was just 5:30 a.m., but employees had already given out tickets for the right to purchase the store's 21 Ruger pistols - even before the doors opened at 6 a.m. Mr. Camouflage, who declined to give his name, was out of luck.

"It's real lightweight, you can keep it on your body," he explained, holding out his palm to show how snugly it fit. "Sixty dollars off? That's a tank of gas. It's a good little gun."

The gun sell-a-thon outraged city officials, who say 85% of illegal guns in New York City can be traced to five states, including South Carolina. The growing list of innocent gunshot victims has prompted Mayor Bloomberg, Police Commissioner Raymond Kelly and others to call for tighter restrictions on gun sales.

But South Carolina shoppers only had to show a driver's license and fill out a form giving basic details like their name, address, height and ethnicity. Some stores didn't even ask for a Social Security number.

During a Daily News spot check at three stores, the clerks made rudimentary calls to run buyers' information through an FBI database.

"There's nothing wrong with a handgun, it's the person that's using it," said Ardis Henderson, 63, who purchased a .45-caliber Kahr handgun for $519, saving about $42.

Henderson was one of about 20 people lined up outside of the ATP Gunshop & Range before it opened its doors at 9 a.m. in Summerville, S.C.

"I think what they need to do is really tighten up on the criminals," Henderson said.

Some shoppers were conflicted about the sale.

"I frankly think a tax-free holiday is ridiculous but I'm still going to take advantage," said Charleston resident Jane Craig, 65, who bought a second family gun - a Smith & Wesson revolver for $549.99 on Friday.

At Trader World, in North Charleston, one of 27 gun stores Bloomberg cited in 2006 for irresponsible gun selling, staff refused to speak about the gun sale, which knocked up to 9% off the price of firearms.

Customer Jeffery Levi, 57, had a message for anti-gun New Yorkers.