DAD CHASES DOWN HIS OWN FAMILY THROUGH THE STREETS OF PATTERSON! SHOOTS HIS WIFE & 2 SONS! 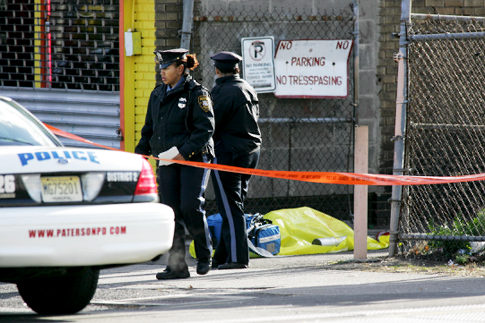 A man chased his wife and two young sons down a Paterson, N.J., street Saturday, shooting them and killing one of the boys before he was fatally shot by an off-duty cop, police and witnesses said.
The gunfire erupted about 9a.m. when Edelmiro Gonzalez, 54, approached his wife, Johanna Gonzalez, 31 - whom he had been separated from for three years - at her mother's home, where she had just dropped off their kids, said Paterson Police Detective Ron Humphrey, according to The Record of Bergen County.

The father shot their 7-year-old son, Adrian, and chased his other son, Edryn, 11, down the driveway and shot him in the neck, Humphrey said.

After shooting the boys, Gonzalez turned to his wife and chased her down Madison St., where he shot her once in the shoulder, said Humphrey.

An off-duty officer, Lt. Washington Griffin, was picking up breakfast with his own young son at a nearby McDonald's drive-thru when he heard "multiple shots" and confronted Gonzalez, police and witnesses said.

Griffin identified himself as an officer and told Gonzalez to put down the gun, cops and witnesses said.

"He told him to stop," Will Hayes told The Record. "The guy didn't, and that's when he shot him."

Griffin fired twice, hitting Gonzalez in the head and in his right leg, Humphrey said.

Gonzalez was taken to the hospital and later pronounced dead, police said.

His wife and his older son, Edryn, were hospitalized in critical condition. Adrian was pronounced dead at the scene, police said.

Some neighbors who witnessed the grisly shooting rushed to help.

Michael Espinosa and his wife, Loretta, heard the shots and saw one boy facedown on the pavement and the other boy with blood gushing from his neck, the couple said.

"When we saw the two children, we weren't ready for that," Michael Espinosa told The Record.

The couple ran toward the wounded children with paper towels, putting pressure on the older brother's neck wound, Espinosa said.

"Not the kids," Espinosa said. "I'll never get over the kids."