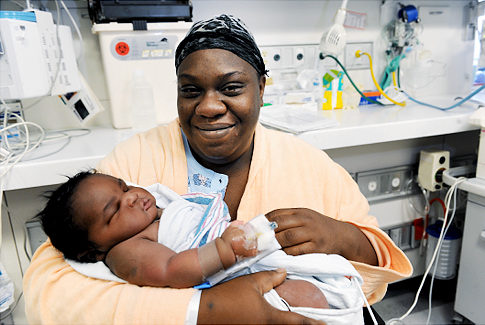 Meet Victor Martinez Jr., the biggest bundle of joy delivered at Lenox Hill Hospital in 30 years.
The little big man weighed 13 pounds, 2 ounces and measured 22 inches when he came into the world by Caesarean section Thursday.

The average weight of a U.S. newborn is 7.5 pounds.

"It was hell, if I had to describe it," Singleton said. "I walked, but not a lot. I would get shortness of breath as I was going."

The Harlem stay-at-home mom and her hubby, Victor Martinez Sr., 28, had no clue that their adorable new addition weighed so much while in the womb.

"We weren't expecting him to be this big," she said, noting the huggable heavyweight already fits into clothes made for 6- to 9-month-olds.

"Now we have to go and buy more stuff."

The parents were floored when nurses told them his size. Singleton's other three kids were nowhere near as big.

Victor, nicknamed "Fat Man" by his parents, has been the hit of the maternity ward - and neither his mom nor his doctors can explain why he came out so big.