Usher & Shakira's Chemistry On "The Voice" 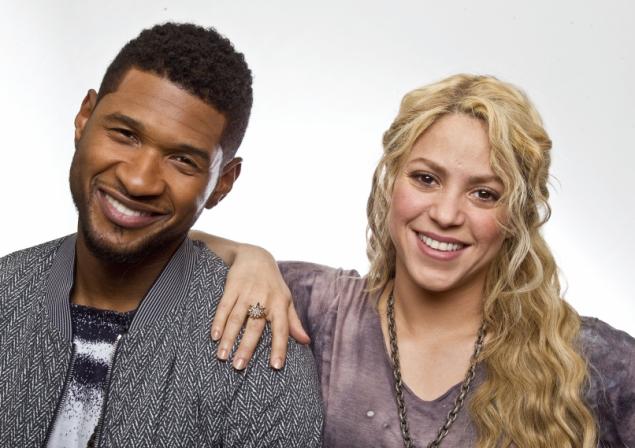 They spin around in revolving chairs, but it’s their chemistry that has heads turning.

Grammy winners Shakira and Usher have been on a roll since joining country crooner Blake Shelton and Maroon 5 front man Adam Levine as judges this season on NBC’s hit singing competition “The Voice.”

“I just feel like hugging him all the time,” Shakira, 36, said of Usher during an exclusive interview with the Daily News.

“The Voice” is arguably the hottest show on TV right now.

It recently hit a year-long high of 14.4 million viewers — no doubt a huge relief to network executives who fretted over the departures of Christina Aguilera and Cee Lo Green. Season-four reviews, meanwhile, have been mostly glowing, with MTV calling the new quartet of coaches a “natural fit.”

Compare that with the state of affairs at former ratings juggernaut “American Idol,” now in its 12th season on Fox.

New “Idol” judge Nicki Minaj gamely assumed the meanie mantle left by Simon Cowell, but her fireworks often come at the expense of her fellow judges, especially Mariah Carey, who comes across as schmaltzy and humorless by comparison.

Once considered unstoppable, “Idol” pulled in about 12.7 million viewers on a recent Wednesday (April 17), and even fewer the following night, when it was bested for the first time ever by a repeat of “The Big Bang Theory” on CBS. “The Voice” is also upsetting the applecart at ABC’s “Dancing With the Stars.”

With episodes of both competitions airing opposite each other, “The Voice” is beating the ballroom dance show by a hair in total viewers and — to ABC’s horror — crushing “DWTS” with younger viewers.

The situation prompted “DWTS” judge Bruno Tonioli to complain to the Daily News last week that pitting “The Voice” directly against his show is “not fair.”

He added: “If we were on alone, then we would have 5 million more viewers. Our [show] is really good.”

“This show has by far the greatest mixture of people you’ll ever see together on one stage,” he gushed in a suite at the picturesque Langham Huntington in Pasadena. “This is the type of shared moment and beautiful diversity that every show wants. And we’re all just so comfortable with it.”

The comfort level was apparent when Shakira leaned over and sweetly pulled one of her long blond hairs out of Usher’s short-cropped beard, where it had landed during a playful photo shoot minutes earlier.

“What’s surprised me most is how tough she is. She’s so nice, but man, at the same time she will chop you into little pieces,” he said of the hip-shaking, hit-making hottie. 'I feel like hugging him all the time,' Shakira says of Usher (above at the Langham Huntington hotel in Pasadena. 'I always want to let her,' says Usher.