Twitter Goes In On Eminem For His SNL Performance 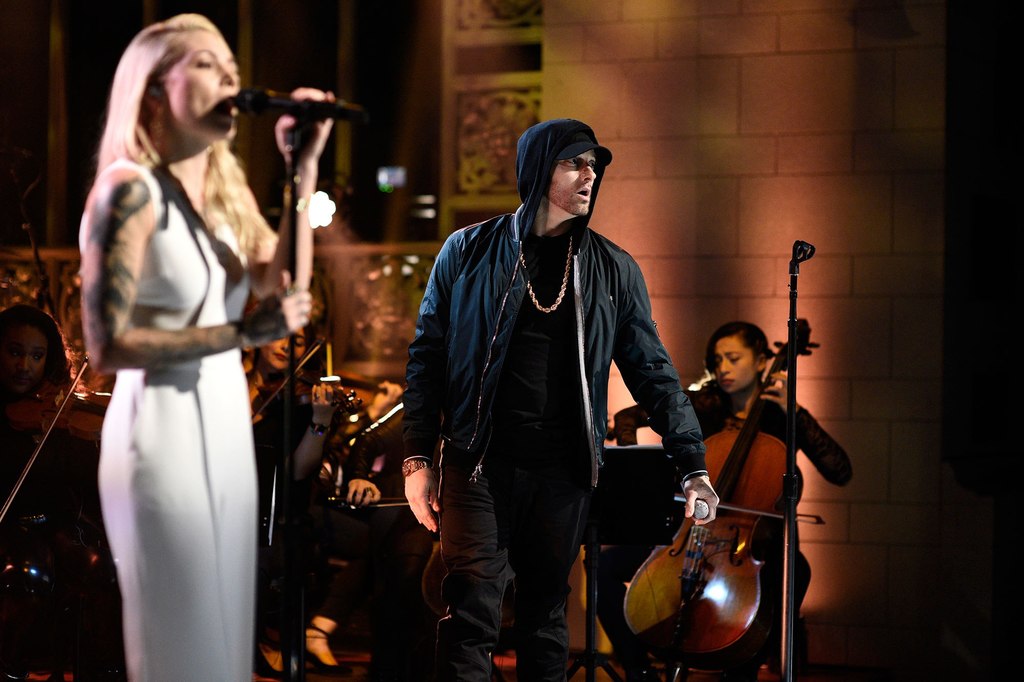 Eminem has taken a Twitter beating over his performance on Saturday Night Live.

The 45-year-old rapper's performance was skewered on social media as some took shots at the entertainer for performing a medley of old hits.

The Detroit native delivered a rendition of his latest single Walk On Water from his forthcoming album Revival, while integrating elements of past hits such as Stan and Love The Way You Lie.

But the feedback wasn't likely what Eminem, real name Marshall Mathers, and his label were looking for, with many grousing that the veteran rapper had lost his touch and had to rely on past glories to win over the crowd. 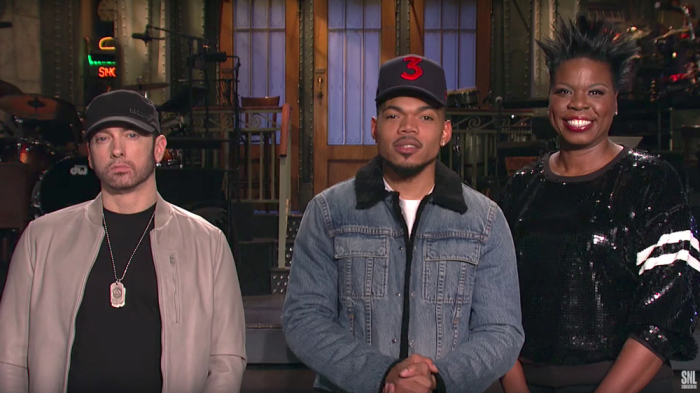 'Eminem doing a time machine performance and it ain't helping the fact that he's washed up and old,' a user wrote, with another saying, 'Awful performance on SNL. @Eminem.'

'Eminem sucks so bad and it sounds like he's spitting every time he talks @nbcsnl make it stop,' one user wrote, breaking specific elements in the performance which they believed weren't up-to-snuff.

Another groused: '#Eminem is terrible...damn does the dude have any sense timing/rhythm? Well at least he got the grey dyed out of his beard... that's something I guess.' 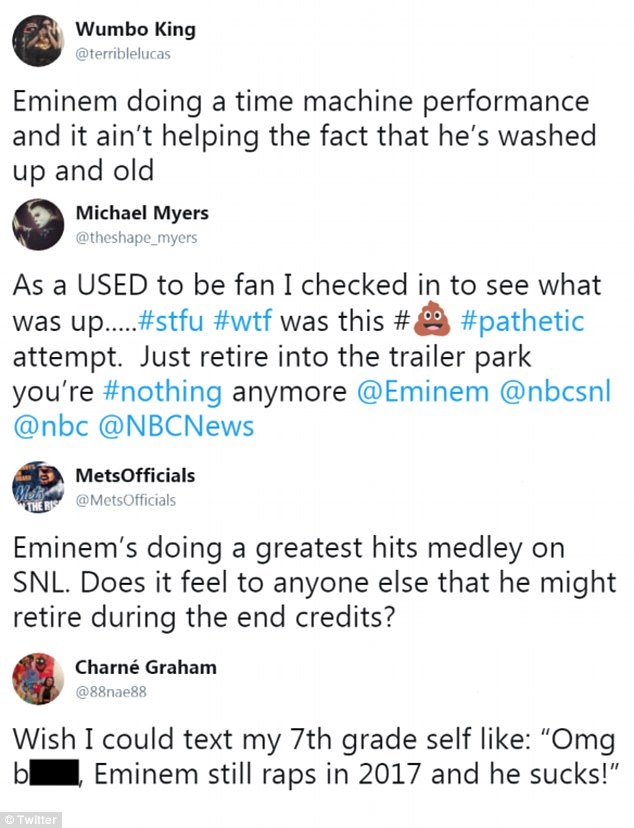 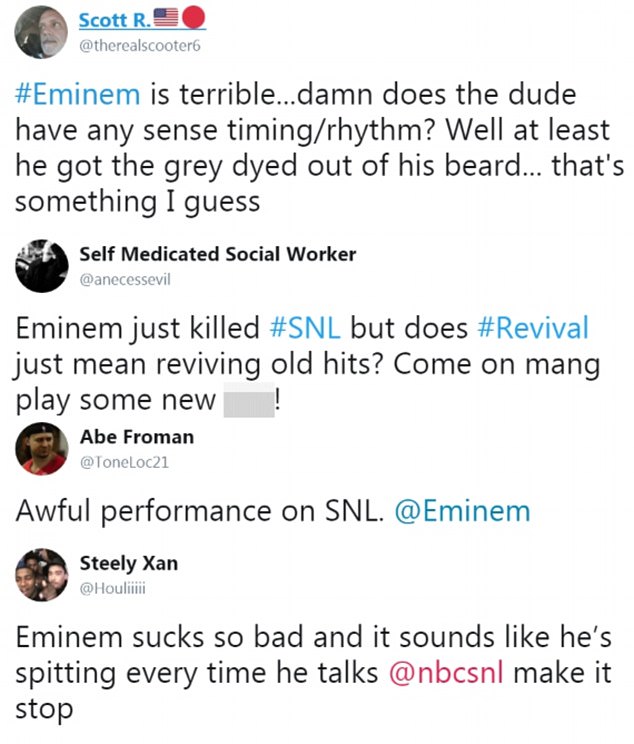 One user said that SNL creator Lorne Michaels badly fumbled the evening, not using guest host Chance The Rapper to his maximum potential.

'Having Chance as your host then wasting your music spot on Eminem is terrible,' the user wrote. 'Just use your host instead of this washed garbage.'

More than one user called for the rapper to hang up his mic with one saying: 'Does it feel to anyone else that he might retire during the end credits?'

Another urged the artist to 'Just retire into the trailer park you're #nothing anymore.'

The rap icon also made headlines in October for his biting anti-Donald Trump freestyle rap broadcast during the BET Hip Hop Awards, where he blasted the president on topics including NFL, the border wall, hurricane relief and more.

One user seemed to draw a parallel between that outing and Saturday's, writing, '#Eminem just did the worst ever #SNL performance but maybe the worst performance of all time anywhere. Trump ruins people.'

However, the feedback wasn't all bad with many of his loyal fans losing their minds.

He had backup on the outing from 31-year-old singer Skylar Grey who sang the parts of Beyoncé from his record.

The Lose Yourself hitmaker scooped his ninth Best Hip Hop award at the MTV Europe Music Awards earlier this month.

After he was announced as the winner, the star opened his speech by saying he was surprised to have received the award as he had been quiet on the musical scene for a few years.

'Yo, first off... I wanna start off, I'm not really sure how I got this, because I haven't had an album out in a few year.
'I got one coming, though.' 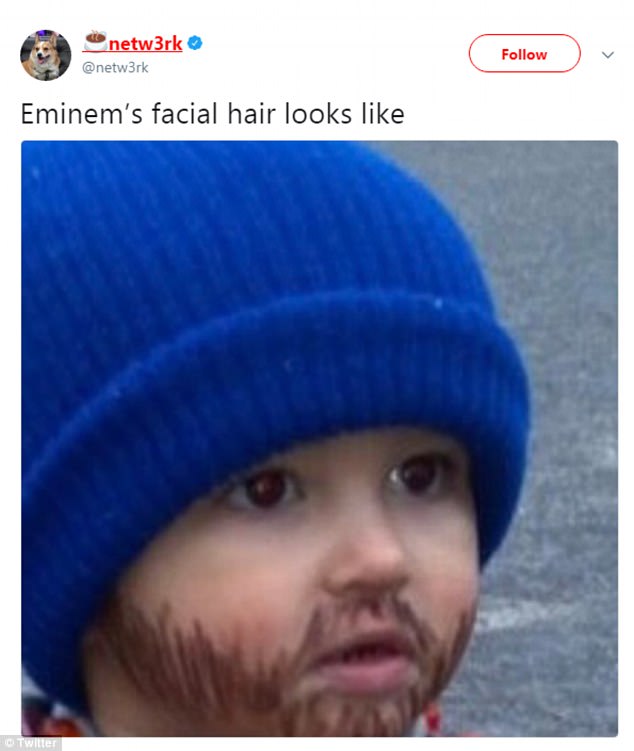