Two thugs dressed in nun masks and habits robbed a Chicago area bank in a scene reminiscent of the recent heist flick "The Town."

The stickup took place just minutes before the 2 p.m. closing time at a TCF Bank in Palos Heights, Ill., the FBI said.

The handgun-toting duo, whom the FBI described as a white man and a white woman, burst into the bank, hopped the counter and ordered a teller and a manager to fill a Nike duffel bag with cash from the vault.

The scene was captured on the bank's surveillance cameras.

The video shows a terrified teller opening the vault as one robber points a pistol at her temple.

The thieves fled in a silver four-door Chevrolet with tinted windows, cops said.

No one was injured in the heist, and cops wouldn't say how much money was taken.

No customers were in the bank at the time.

Palos Heights police Detective Gerald Wodka told the Chicago Sun-Times that investigators had some leads "but nothing concrete."

Wodka said it's not the first time the bank has been robbed. 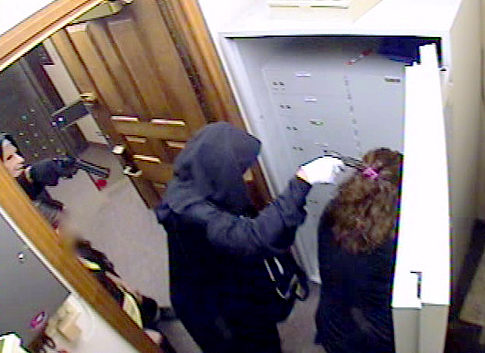