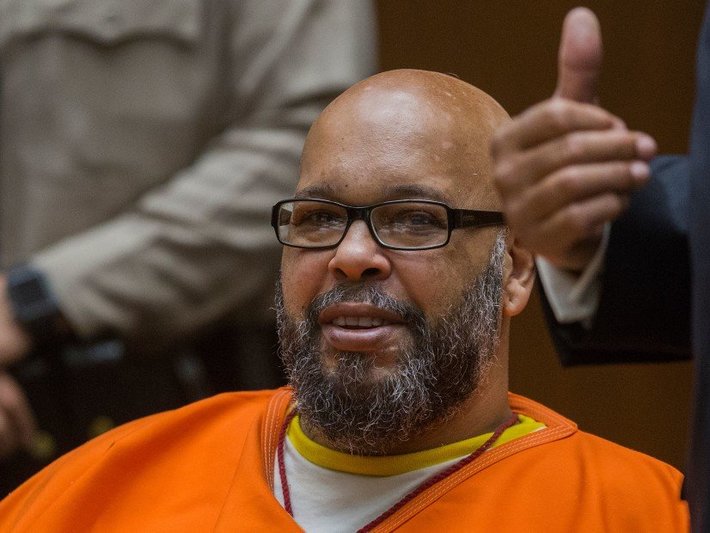 The 'Death Row' boss's son Jacob welcomed a beautiful baby girl to the world on Wednesday, November 6, 2019.
Suge 'Jacob' Knight, who also goes by Lil Suge, currently stars in the hit reality show 'Love & Listings' and is a rising star in the real estate world.

Marion “Suge” Knight is currently sitting in a California prison serving a 28-year sentence, after accepting a plea deal in the case of a 2015 hit-and-run that left one man dead and another injured.

Cameras we're rolling while family member's arrived at the Los Angeles hospital where the baby was born.

The Blast spoke to Diamond, who is professionally known as 'Diamond ICEGIRL' and is one of the original members of Death Row west coast rapping crew, and a famous figure who was signed to Easy E's Ruthless Records

"First and foremost I would like to say congratulations to my to dear nephew Lil Suge Knight, a new addition has been born."

She continued, "it’s a baby girl, the last name of course will be Knight."

As for the baby's name, "My nephew Sugie will reveal to the world his daughter’s new name soon, but he’s keeping it family-oriented."

Auntie Diamond gives props to Jacob for the man he has become and taking on the world of real estate."The world will now see that you are a father first and now a Businessman to smash in get millions like we do." she said.

Diamond ICEGIRL, is who is a female solo artist, also stars in the reality show 'Love & Listings' has been signed on for season 2 of the Vh1 show. In previous airings, Jacob gets advice from her and is very comfortable discussing family business with the rapper.

Fans of the new reality show, get to see Knight receive training under celebrity real estate mogul Tai Savet. “Jacob has to lose the ego if he’s going to make it in this business. He grew up around rappers, so there’s a lot of cockiness. He wasn’t taught any differently. To be good, he has to be a chameleon. Real estate isn’t hip-hop, and he has a lot of growing up to do, said Savet who is also a creator of the show.

In one of the first scenes of the show, Jacob Knight discusses living with his famous father's name, while working in the real estate business.

“My father made the greatest record label on the west coast, and now I’m trying to do the same thing in my own way. You put the name Suge Knight anywhere and the whole world will look … everybody loved my father," he said.

Suge has received several good news phone calls in the last few days, the first being the news that a $107 Million judgment levied against 'Death Row' -- that forced it into bankruptcy -- was recently tossed by a Los Angeles County judge.

The woman and her ex-husband who helped financially back the launch of 'Death Row' received the $107 Million judgment. But, since then she has compared notes with Suge Knight and has decided to join forces with him to get the money back.

Suge is now working with Ray J and Nick Cannon on bringing the brand back.