SO THERE'S A SHARK SWIMMING THROUGH A NEW JERSEY NEIGHBORHOOD! The amazing picture was spotted by WBTW, which reported a number of other remarkable images as a result of the storm. Already images have been coming in of streets entirely wiped out by rain in Atlantic City and parts of Brooklyn, and television images have shown reporters being pummeled by wind and rain.

CBS News’ national correspondent Chip Reid was knocked down by a giant rogue wave as he reported on Hurricane Sandy from Ocean City, Maryland. The wave came up from behind Reid and his cameraman, knocking the reporter to the ground.

“Fortunately we did manage to save the camera.” Reid said.

The storm also brought down many live electrical wires, with images of a sparking wire down in Red Hook, Brooklyn. Another image from New York showed a giant crane dangling 75 feet above the city pavement after it was damaged by high winds from the storm.

But perhaps the most dramatic image of the day so far has been the shark swimming in the front yard. After weather forecasters predicted a massive storm last year in Hurricane Irene, a storm that fizzled, many people were left wary about whether Hurricane Sandy would really be as bad as experts were warning.

As if the shark swimming in the front lawn wasn’t enough proof, the storm’s early damage is enough to show that it’s serious. Though The Huffington Post reported that it was downgraded when it hit land, the storm has still been able to muster hurricane-strength winds in New Jersey and cause thousands of canceled flights and create power outages over hundreds of square miles. 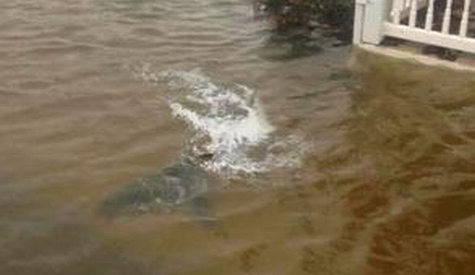 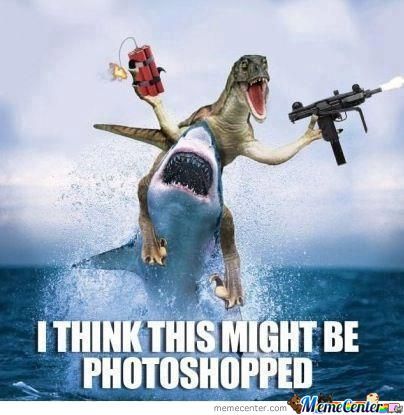