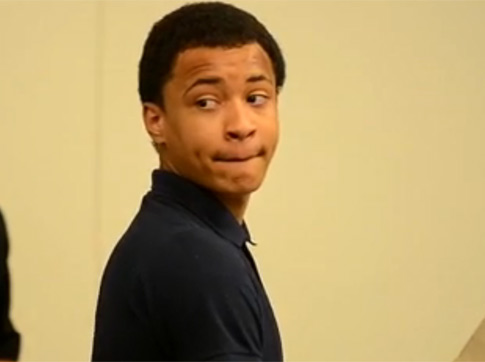 A Syracuse teen will be locked up for the next two to six years for a robbery that netted him 7 cents, a judge ruled.

Onondaga County Judge William Walsh said on Monday that he decided to throw the book at Anthony Stewart, 15, because the teen didn't plead guilty to robbing a 73-year-old man last December.

Stewart and a pal, Skyler Ninham, 16, were charged with jumping and robbing the man on Dec. 22.

The two were toting BB guns that resembled real pistols when they knocked the victim to the ground, broke his glasses and robbed him of just 7 cents - the only money the man had on him at the time, prosecutors said.

Ninham pleaded guilty in July and was sentenced to one to four years in state prison.

Stewart decided to fight the case. A jury found him guilty of first-degree robbery.

Walsh said the victim fingered both Stewart and Ninham in the caper, "and yet you still denied it," Syracuse's Post-Standard newspaper reported.

"Well, that cost you," the judge said.

Stewart's lawyer, Laurin Haddad, said after the sentencing that she was disappointed with Walsh's decision to reject her plea to treat the boy as a youthful offender.

The judge's decision means the felony conviction will remain on Stewart's permanent record.

"For 7 cents, now you're making someone a felon for the rest of his life," Haddad told the Post-Standard.