SH!T IS REAL IN CALI! REPORTER GETS SHOT WHILE REPORTING ON THE WEATHER! 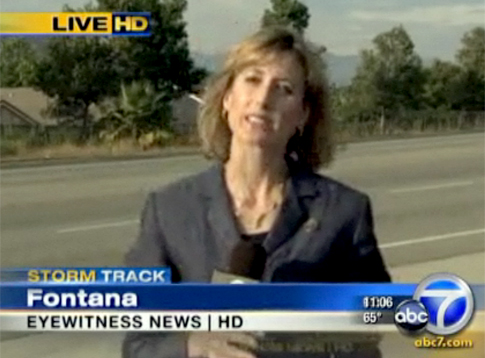 A California news reporter was shot in the hand during a live news broadcast on Saturday.
KABC 7 News' Leanne Suter was struck by a BB gun pellet while reporting on the weather around 6 p.m. in Fontana, a city just west of San Bernardino, according to KABC 7 News.

The veteran newswoman was taken to the hospital, but is doing okay. Her news van was also hit, but her photographer escaped injury.

"We are grateful no one was seriously hurt and we are fully cooperating with police in their investigation," said Arnold J. Kleiner, president and general manager of KABC-TV.

"Our crews and reporters are very conscious of good safety practices and take proper precautions when on assignment," he said. "They could not have anticipated that someone would decide to target them in this way."

Suter was standing near Summit Avenue and the 15 Freeway when she was struck by the pellet, police said. The shooting took place in the middle of her report, moments after she stopped speaking and footage of interviews with residents began. When the video returns to Suter, she can be heard saying, "Look at the blood."

Visibly shaken, Suter continues with her report only briefly looking down at her hand before signing off.

Authorities later determined the location of the house where the shots were fired from. Two teens, ages 16 and 17, were arrested and charged with assault with a dangerous weapon and have been released to their parents.