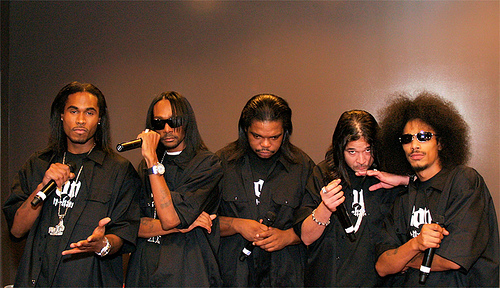 Rap group Bone Thugs-N-Harmony are in the news again, as a former associate has filed a $27 million dollar lawsuit against the members.

The lawsuit was filed in the Cuyahoga County Court of Common Please in Cuyahoga County, Ohio against Sony, Ruthless Records, Relativity, Loud Records, WMG, Mo Thugs Inc.. and each member of Bone Thugs-N-Harmony.

According to Roland Brown, he wrote the songs "Take Your Time" and "Here With Me" by the female group Tre.

The album, which was released in November of 1996, is currently being sold on various outlets, including the Internet.

The lawsuit claims Mo Thugs Inc. never paid a dime in royalties, despite the fact that the album sold over 1 million copies and spawned Mo Thug: Family Reunion, which also moved over 1 million units.

DO THEY EVEN HAVE $27 MILLION?