A ENEMY OF YOURS IS A FRIEND OF MINE! LOL! RICK ROSS TO WALK OUT WITH PACQUAIO! 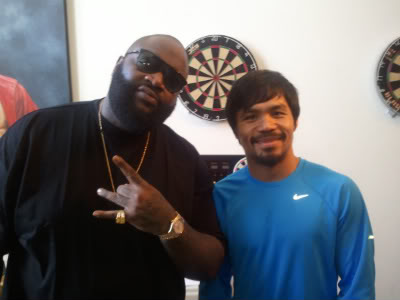 Manny Pacquaio will show solidarity with Hip-Hop culture by having Miami emcee Rick Ross walk him to the ring for his May 7 showdown with Shane Mosley.

Both men became acquainted with each other after participating in Nike’s 2010 ”Boom” commercial campaign.

50 has publicly supported Mayweather in several fights, most notably accompanying him to the ring for his record-breaking 2007 showdown with Oscar De La Hoya.

May 7 will mark the first time Pacquiao has done a ring walk with a rapper.

At press time, neither Pacquiao nor Ross have disclosed what music will be used.


LMAO! THIS IS SOME STRAIGHT BULLSH!T! I'M A BOXING FAN & I KNOW THAT THIS NI**A MANNY REFUSE TO LEARN & SPEAK ENGLISH! SO HOW THE F**K IS HE LISTENING TO RICK ROSS! C'MON SON!