Bay Area rapper Saweetie has confirmed fan suspicions that she and Migos member Quavo have broken up.

“I’m single,” she stated clearly in a message to fans via Twitter on Friday. “I’ve endured too much betrayal and hurt behind the scenes for a false narrative to be circulating that degrades my character. Presents don’t band aid scars and the love isn’t real when the intimacy is given to other women.”

The news comes as a shock to many, as the couple were seemingly very much in love just one month ago on Valentine’s Day.

“I emotionally checked out a long time ago,” she continued in a second tweet, “and have walked away with a deep sense of peace and freedom. Excited for this new chapter of elevation.”

While Quavo, 29, has yet to address the drama surrounding the current state of his relationship, fans began assuming the pair split this week after he unfollowed the artist on Instagram — two days after she unfollowed him.

It also wasn’t lost on followers that the “Best Friend” rapper, 27, seemed to imply her former beau cheated.

“How you cheat on Saweetie? SAWEETIE??!!,” asked one fan, as another wrote, “Quavo was out here cheating the way it seems …I remember when folks on here was talking him and saweetie was relationship goals like they do every celebrity couple ..and you see what happen. You don’t know what’s going on behind closed doors. Stop envying people relationships.”

Another observer couldn’t help but compare Quavo’s situation to that of Migos group mate Offset, who was called out by wife, Cardi B, for cheating. The “UP” rapper ultimately decided, however, to give her relationship another shot.

“Quavo clearly don’t have Offset juice.. not in music, not in cheating. Offset is the goat,” they chimed in.

The couple quietly began dating in 2018, with Saweetie confirming their relationship on daytime talk show “The Real.”

During better days, Saweetie opened up to Page Six about how she knew Quavo was in love with her, telling us in January, “The moment I realized that Quavo really loved me is when he saved me some of his food. He gave me his last piece of chicken.”

“I wasn’t testing him or anything,” she continued. “I’ll be coming out of a Zoom meeting or done doing something and he would have saved me some of his food.

“Those are the things that really matter: the things that have no price on them. The Bentley is cool but I’m really into intimacy and how you treat me with my emotional feels.” 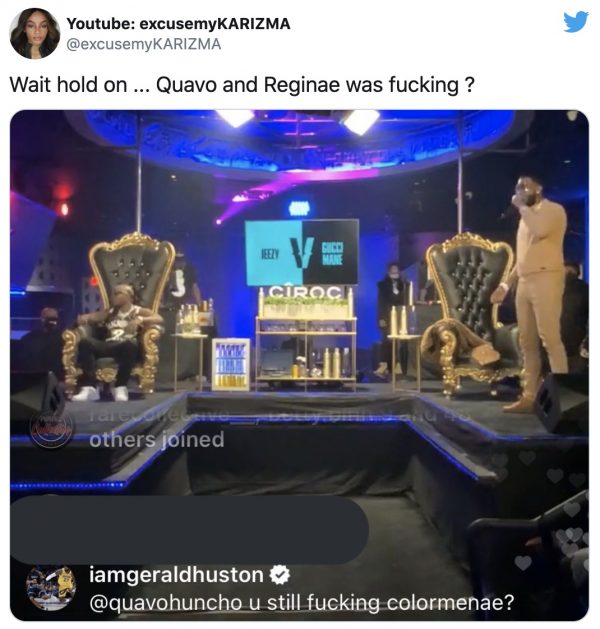