In court, she stood beside her lawyer, Dawn Florio, while a judge adjourned her misdemeanor assault case to Nov. 12 for possible disposition during the brief hearing.

As Ma strolled out of the courthouse in a pair of Gucci sunglasses, she said of her purse, “It was a gift from Lil’ Kim. Her album just came out this week so I’m wearing it for her.” 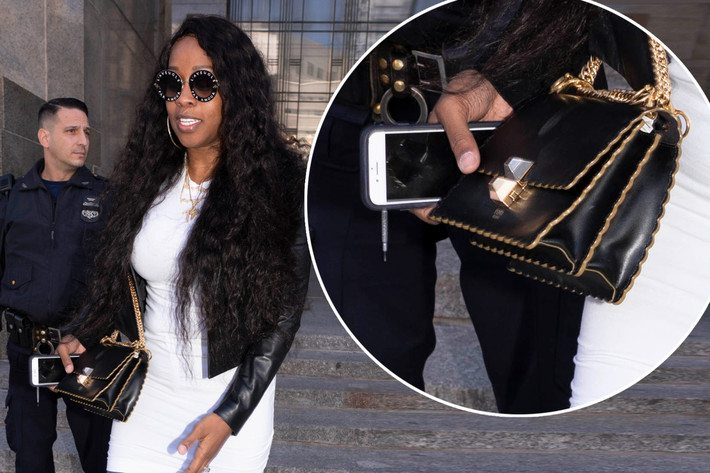 Florio said she and her client were hopeful the case would be resolved on the next date.

“We’re just looking forward to a dismissal,” the lawyer said.

The “Lean Back” singer, whose real name is Reminisce Smith, is accused of punching TV personality Brittney Taylor in the right eye April 16 during a concert at Irving Plaza. The two appeared together on the reality show “Love & Hip Hop: New York.”

Two months after Ma’s arrest, Taylor was busted on assault raps for allegedly clawing another woman’s neck and chucking a phone at her head, for which she took a dismissal deal in August.

Florio said on the last court date that Taylor allegedly sent some friends a group chat that exonerated her client. The message implicated Ma’s husband, Papoose, as the puncher. It was turned over to the Manhattan District Attorney’s Office.

“I have the video,” Taylor allegedly wrote, according to a screenshot posted on social media. “Papoose is a B–tch for toching [sic] me and he’s a B–tch for making his wife take the wrap [sic] for it! SMFH!!! N—-REALLY KNOCKED ME OUT BRO! S–T MAKING ME SICK TO MY SOUL.”