NYPD COP SLAMMING A BROOKLYN TEEN ON THE GROUND CAUGHT ON TAPE! 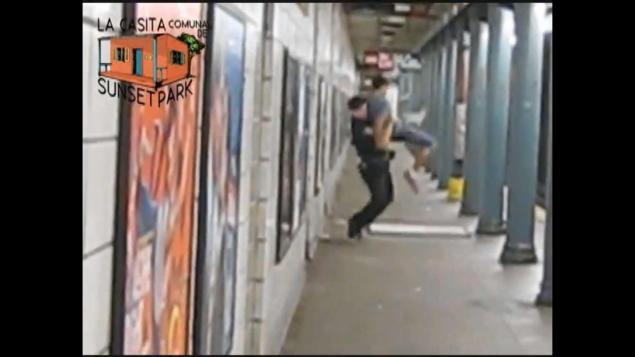 A Brooklyn teenager says an NYPD transit cop bodyslammed him on a subway platform in an incident caught on videotape.

Sean Pagan, 19, was waiting for a train to Coney Island at the 45th St. subway station near his Sunset Park home when he was confronted by the cop at about 8:30 p.m. Thursday.

The video shows that the uniformed cop has Pagan put his hands against the wall and frisks him, but Pagan squirms and complains when he feels the frisk gets too intimate.

The cop reacts by slamming Pagan twice on the ground and putting him in a headlock. The advertising sign Pagan is holding onto is torn from the wall.

"I was just in shock he really did that," Pagan said. "I'm sure there are other kids who got the same treatment or worse treatment that wasn't recorded."

The encounter was taped by David Galarza of neighborhood activist group La Casita Comunal de Sunset Park, who happened upon the scene.

A friend of Pagan's can be heard speaking in Spanish on the recording indicating that Pagan may have jumped a turnstile.

Authorities say Pagan was seen writing graffiti in a restricted area of the station.

This kinda sh!t happens everyday! He stopped him for a Stop & Frisk! Why? Cause he looked guilty? F**ks him up & charges him with resisting arrest? Sure didn't look like resisting arrest! More like human rights violation! The Nypd picks you out of random & search you & make you provide ID. But when they f**k up & you ask them their name & badge number which their suppossed to provide! They dont say sh!t because they know what their doing is wrong! F**king up the lives of young black & hispanic males for nothing by giving them unnecessary records for bullsh!t! All part of the system & how NYC makes it's money I guess that's why Bloomberg goes around to black churches & says it's necessary! PURE BULLSH!T! That's why it's always