Nicki Minaj Says She's In A Relationship With Eminem After teasing a relationship with a "white guy" on "Barbie Tingz," Nicki Minaj followed up with an Eminem shout-out in her latest guest feature for YG's "Big Bank." Fans put the pieces to the puzzle together, and when one asked the 35-year-old if she's dating Slim Shady, she offered up an eyebrow-raising reply on Thursday night (May 24).

"You Dating Eminem," wrote user @acie.slaytor, to which the Queen rapper simply answered: "yes." If you connect the dots, there could possibly be some validity to her statements. "I'm still fly, just bagged a white guy," Minaj rapped on her April single "Barbie Tingz."

Nicki gets a little more specific for her star-studded assist alongside Big Sean and 2 Chainz on YG's "Big Bank," which released on Friday (May 25). "Told them I met Slim Shady, bag the Em/ Once he go black, he'll be back again," the Young Money spitter shrewdly rhymes.

The "Super Bass" rapper has been in multiple high-profile relationships throughout her career, most recently, with fellow Queens native Nas, which was reportedly cut off at the top of 2018.

Shortly after announcing that her Queen album had been pushed back to August, Nicki relaunched (May 24) her philanthropic "Student of the Game" scholarship giveaway. Minaj blessed a handful of students with checks to take care of educational-related loans ranging from tuition to book costs and more. 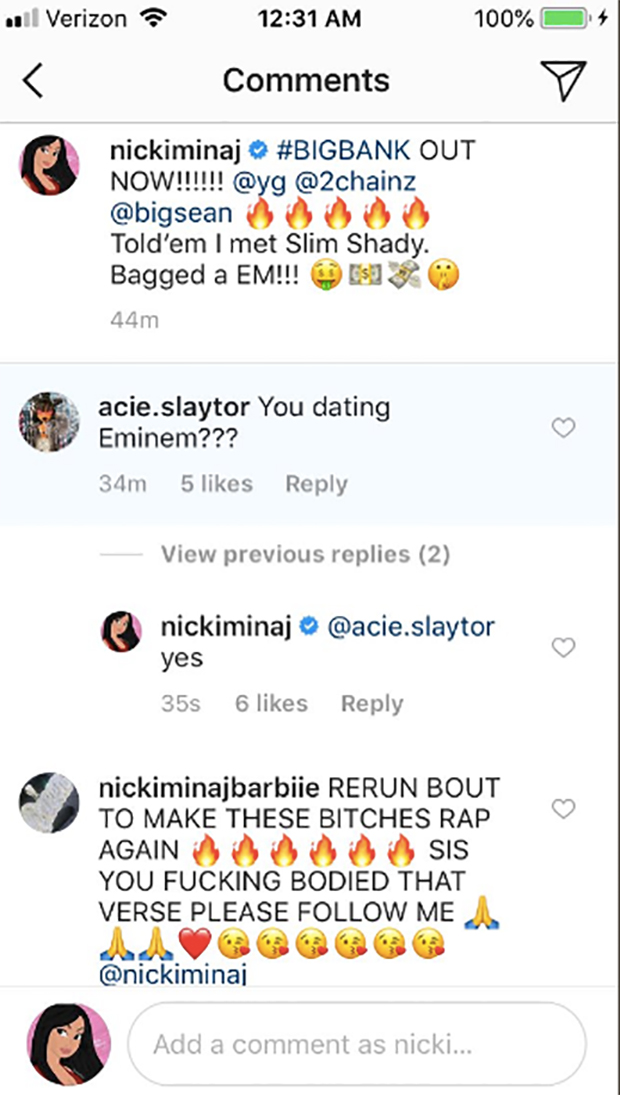