MELYSSA FORD PICKS A BONE WITH ESSENCE MAGAZINE SAY'S HOW DARE THEM PUT NAOMI CAMPBELL ON THE COVER! 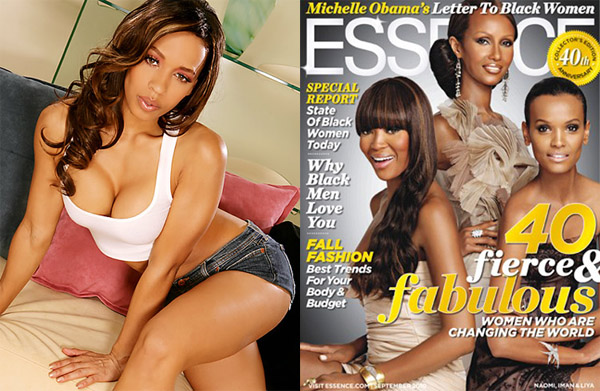 Melyssa Ford had plenty to say recently on the subject of Essence Magazine and a few of their editorial decisions — particularly their decision to use Naomi Campbell as one of the 40th anniversary cover models.
In a recent interview with VIBE Magazine Melyssa admitted she hasn’t been feeling Essence too tough lately, and didn’t hesitate to say why:

Right now Essence has on the cover, three of the most gorgeous black men ever created on the face of this fu*king Earth. They have Blair Underwood who has always done it for me, Boris Kodjoe whose definition in the dictionary is fine, and then they got Lance Gross—chocolatey loveliness. And you know what they fu*king have the nerve to have as the fu*king title of the cover story? “How To Keep Black Men Happy and Faithful.” And faithful! How dare you?! It makes me fu*king sick. [It’s like saying] ‘Women take note—how to keep your black men healthy and keep from straying from you ‘cause it’s your fault.’ And black women wrote this to their f*cking counterparts. As if to say, ‘If he strays, it’s your fu*king fault. You didn’t cook enough. You didn’t blow him enough. You didn’t fu*k him enough. You didn’t do enough to keep your fu*king man healthy or faithful.’ O-M-fu*king-G!

Dang girl… That’s a lot of f*cking going on.

Melly didn’t stop there either. She’s also got a bone to pick with Naomi Campbell as a role model for Black women:

There are times where I’m surprised at the audacity that they fu*king have to put something like that on the cover, but they’re regarded as the soul sista’s bible. They accept a fu*king elitist attitude on who they’ll have on the cover and who they won’t? Please. Who was on the cover last month? They were toasting to women above the age of 40, and how beautiful they look, but Naomi’s on the cover? Okay, yes. Granted, Miss Naomi walks a catwalk, and she’s still killing 16-year-old and 20-year-old girls. Yes, but she has serious anger management issues and an overwhelming sense of entitlement, and she is engaged in fu*king illegal activity that’s directly related to the blood diamond industry in Africa. And you’re putting her on a pedestal? Is that what you’re doing? But you won’t cover somebody like me because I based the earlier part of my career on my sexuality? My moral compass hasn’t been shifted off too much. My values are pretty good considering the causes that I believe in and places I’ve volunteered my time and given my money to, but you don’t feel the need to ever cover any single part of my career. You don’t even acknowledge that I even fu*king exist. But this is what you cover and this is the things you say? I think it’s hypocrisy.

And there’s the rub. Melyssa feels slighted because Essence won’t pay her any mind.

We’d squeeze a joke in about “real models” vs. “video models” but we actually think Melyssa has a point here. Why should Naomi get a pass, but Chris Brown be out of work for a year? She’s beaten more women! And she still gets magazine covers! SMH.