LMFAO! TOLD YA'LL LIL WAYNE HAD ON SOME FEMALE JEGGINGS! 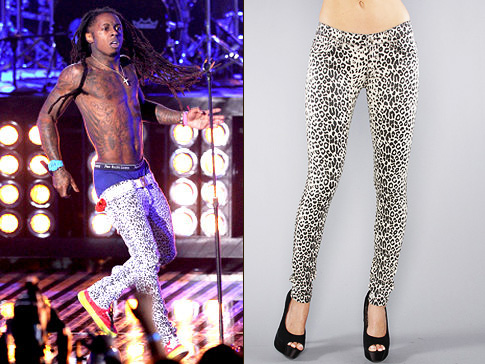 Rather than wearing them high and tight, Weezy wore them low, exposing the top part of his boxers.

The odd fashion choice even sparked its own Twitter feed: Waynes_Jeggings.

Tripp NYC, an East Village clothing company that designs rock and roll inspired fashions, took to its Facebook page to claim the credit.

The jeggings retail for $44 and can be found at multiple New York City boutiques, including Patricia Field, Trash and Vaudeville and Opening Ceremony, according to company's website.

At $44, the ladies' jeggings are far more reasonable than the women's silk Celine tunic that Kanye West wore during last summer's performance at the music festival Coachella.

Similar silk tunics from the French luxury brand's collection retail for around $500.