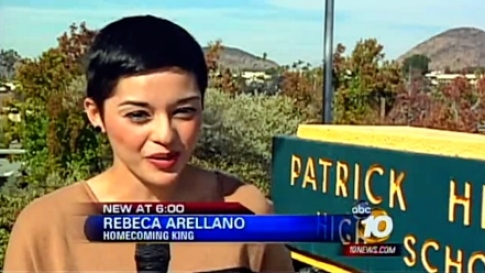 Happy is the head that wears the crown.

Her girlfriend Haileigh Adams has been nominated for homecoming queen.

Arellano told KGTV that entire situation feels like something out of a dream. After all, she and her girlfriend hadn’t even planned on running for the titles.

"They were chanting my name and it was one of the most amazing experiences I've ever had," she said.

Both she and girlfriend Adams say that they’ve been overwhelmed by the kind support of their friends, family and schoolmates.

"We don't know if we're going to win," Haileigh said Thursday. "We're not sure, but if we do, it would be an amazing gesture to the LGBT community and everything that we stand for."

Still, not everyone is happy. There were a few guys who had their eyes on the homecoming king crown.

"Any of the guys are not happy about me running because I'm taking a guy's place, but if there was any other way to do it and have two lesbians that are a couple win, I would," Arellano aid.

For other students stillexamining their sexuality, the win meant a lot more than just a moment in the sun at a yearly dance.

"I'm actually bi myself," a student named Gladys said. "It makes me think that you can be more open and stuff, and the way the school's reacting to it, like, positively … It makes you more comfortable in the school, and in your environment."