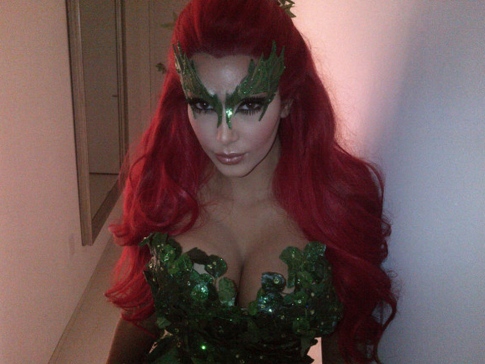 The reality star dressed up as Poison Ivy from "Batman & Robin," who killed her enemies with toxic kisses, for the Midori Green Halloween bash at LAVO in New York City on Saturday.

Kardashian's version -- a low-cut green mini decorated with leaves -- was of course much sexier than the costume worn by Uma Thurman in the 1997 flick.

"The party is obviously with Midori," Kardashian, who is also the liquor's spokeswoman, told Us Weekly. "So I wanted to wear something green and I thought, what really is there to wear green? There's Tinkerbell or a mermaid -- and I wanted to be Poison Ivy. I like the red hair idea."

Noticeably missing from the fun: her husband Kris Humphries.

That b!tch got the right costume! SHE IS POISON!