Kanye West Says 400 Years Of Slavery Was A Choice The first was a man who opened up about his mental health, his family, and his art in a nearly-two hour interview with radio host Charlamagne Tha God.

The second was a Kanye who appeared at the TMZ headquarters where he had this to say:

"You were there for 400 years and it's all of y'all. It's like we're mentally imprisoned."

Provocative statements are second nature to the 40-year-old rapper. And this week he's been making headlines left and right, including proclaiming his love for President Trump.

But when he made his off-handed remark about slavery, TMZ employee Van Lathan took him to task for it.

"While you are making music and being an artist and living the life that you've earned by being a genius, the rest of us in society have to deal with these threats to our lives," Lathan said. "We have to deal with the marginalization that's come from the 400 years of slavery that you said for our people was a choice."

Lathan added, "Frankly, I'm disappointed, I'm appalled, and brother, I am unbelievably hurt by the fact that you have morphed into something to me, that's not real."

As his words lit Twitter on fire, Kanye tried to explain what he meant. Here is his series of tweets Tuesday evening:
"[T]o make myself clear. Of course I know that slaves did not get shackled and put on a boat by free will. My point is for us to have stayed in that position even though the numbers were on our side means that we were mentally enslaved."

And then Kanye quickly made it about Kanye:

"[T]he reason why I brought up the 400 years point is because we can't be mentally imprisoned for another 400 years. We need free thought now. Even the statement was an example of free thought. It was just an idea. [O]nce again I am being attacked for presenting new ideas." 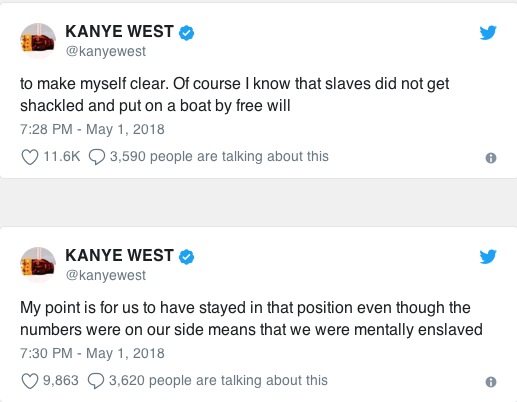