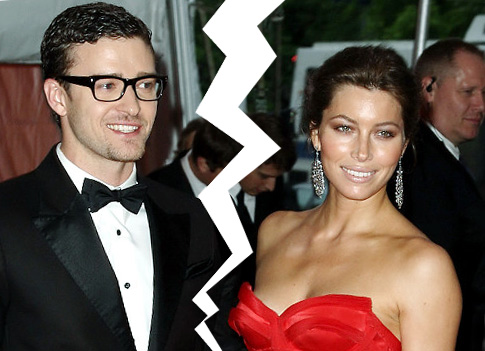 Justin Timberlake and Jessica Biel's relationship is dead and gone.
After a rocky three-year run, the couple has reportedly called it quits, Us Weekly reports in its latest issue. And it was the "SexyBack" singer who is said to have ended things over the phone "about a month ago."

While in New York in September to show his William Rast clothing line at Fashion Week, Timberlake was "clearly on the hunt," snitches a friend.

The singer supposedly dirty-danced with a tall blond in a short black dress at a Manhattan club Sept. 9. The late-night incident is similar to another guys' night out in June when JT was allegedly spotted making out with a woman at N.Y.C. hot spot Avenue.

The troubled starlet eventually claimed her Twitter account had been "hacked," however an Us source says she panicked after Timberlake "told all his people to ban Lindsay and make her life miserable."

Timberlake's attempt to fix his flawed relationship with his curvaceous girlfriend proved unsuccessful as the couple had been having problems long before cheating rumors began.

In July, the Daily News' Gatecrasher column reported that Timberlake and Biel's relationship was quickly headed for Splitsville.

"Things don't look good for them right now — they've hit a really rocky spot," confides a source close to JT, who added that serious problems began back in February during a boys' trip to Las Vegas.

"Justin had to leave dinner once because Jessica was calling him incessantly. They got into a huge screaming match over the phone about how she's always ‘checking up' on him," said the source. "She's extremely needy and is always keeping tabs on him."

The insider wasn't the only one who thought the actress was a bother.

"All his friends think she's really annoying," added the source. "She's always trying to be one of the guys. She and Justin have no chemistry."

Now that Timberlake has finally cut the cord on the couple's ill-fated romance, Us reports that Biel is in "severe denial and won't accept" the split.

Another source added, "There's no way of knowing if it's a firm breakup, because with them it's so hot and cold."