Journalist Fired After Being Caught On Camera Kicking & Tripping Immigrants 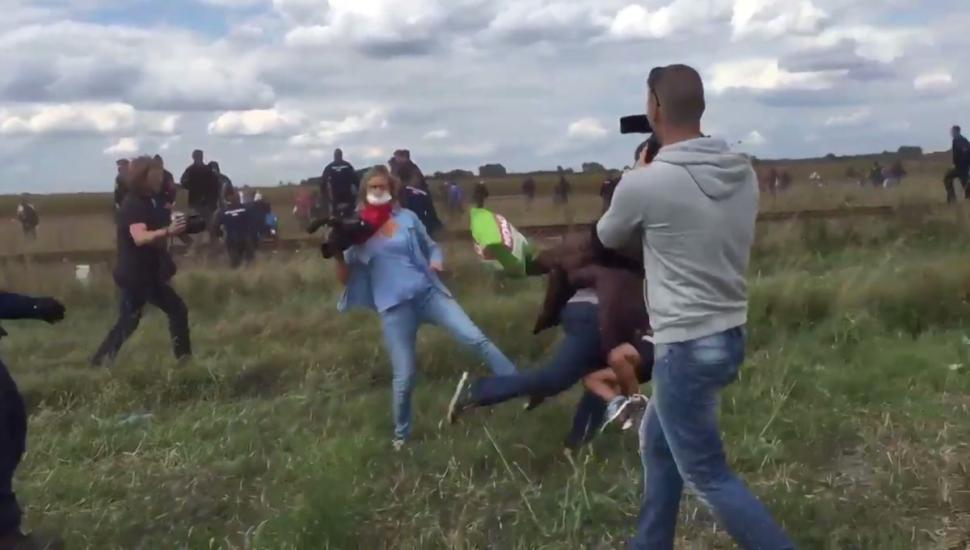 A female Hungarian videojournalist has been fired from her far-right news organization after shocking footage emerged of her kicking and tripping migrants, including children, fleeing police in southern Hungary.

Petra Laszlo was filming the scene in Roszke, near the Serbian border, when video taken by other videographers captured her kicking children as they broke away from police. One clip clearly showed her stick out her leg and trip a man, carrying a small bag of belongings and a young child in his arm, sending the duo tumbling to the ground in angry tears.

Laszlo was working for N1TV, an Internet-based TV news station associated with the country’s far-right Jobbik party, when she stuck her foot in it, Agence-France Presse reported.

"An N1TV colleague today behaved in an unacceptable way at the Roszke collection point," N1TV's editor-in-chief Szabolcs Kisberk said in a statement on the channel's Facebook page Tuesday. "The camerawoman's employment contract has been terminated with immediate effect as of today, we consider the matter closed.”

The Jobbiks have long held anti-Semitic and anti-immigration views, according to reports. It’s the country’s third-largest party in Parliament, according to The Telegraph.

Footage at the scene captured by Laszlo was uploaded to the station’s Facebook page. It shows the man with the child in his arms barreling toward Laszlo, but cuts out before the incriminating trip.

The outrageous stunt led furious viewers to create a “Petra Laszlo Shame Wall” on Facebook, which garnered some 2,000 “likes” in just hours.

Hungary is one of the most popular routes for refugees fleeing war-torn Syria to enter the European Union, oftentimes through the country’s porous border with Serbia. Some 2,000 to 3,000 refugees have entered the country daily, according to some estimates.

The country’s leaders plan to build a border fence to stem the flow of migrants, many of whom hope to make their way to Germany, one of the most receptive countries to the plight of the desperate migrants.

In the coming days, Hungary can likely expect another wave of 42,000 asylum seekers, according to the United Nations refugee agency.

Many of those who have already entered the country have found themselves stranded in Roszke, where migrants have built an impromptu camp, littered with garbage and tents, between railroad tracks and a corn field.

The area is where Laszlo found herself Tuesday, when several migrants surged forward and ran from police guarding the border. At least one person was hurt in the stampede, during which authorities used pepper spray to try and quell the desperate crowd.

The migrants plight has gained international attention after the image of a drowned 3-year-old Syrian boy who washed up on a Turkish beach was captured by a photographer last week, With News Wire Services.