A rally remembering Trayvon Martin was boosted by some star power Saturday (July 20).

Jay Z and Beyoncé quietly attended a New York City protest of Stand your Ground laws, with MSNBC's Al Sharpton telling the crowd "two of the baddest artists of all time" were in attendance, The Huffington Post reports.

The event, organized by Sharpton and other community leaders, was one of more than 100 similar protests held around the country.

"Jay Z and Beyoncé said they didn't want to speak and they didn't come for a photo op," Sharpton said. "Beyoncé put a beautiful message up on Instagram. Let me tell you that before a lot of you were down, Jay Z always supported us."

"Jay Z told me, 'I'm a father. Beyoncé is a mother.' We all feel the pain and apprehension -- the law must protect everybody, or it doesn't protect anybody," Sharpton said. "We do not come from hate, we come from love of children."

The series of protests comes one week after George Zimmerman was acquitted in the shooting death of Martin, the unarmed teenager Zimmerman killed in Florida last year. Zimmerman claimed he acted in self-defense. The acquittal was largely met with disappointment from Hollywood, and a number of artists have publicly expressed their support of Martin and his family. 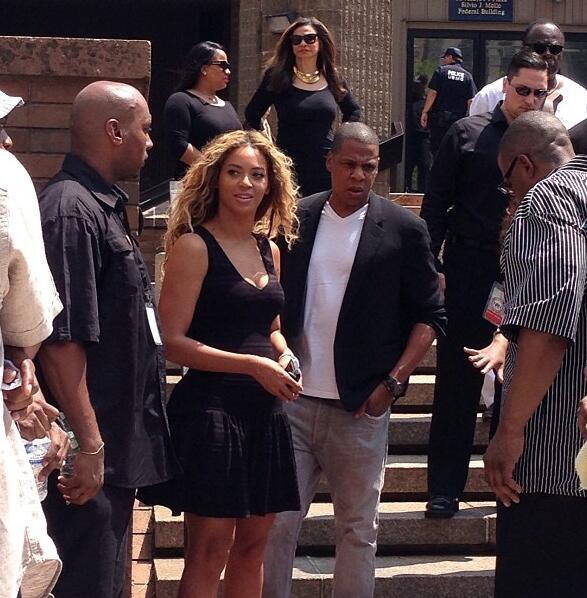 Justin Timberlake and Jay Z dedicated a song to Martin Wednesday as they kicked off their co-headlining tour in Toronto. Timberlake began singing Alphaville’s "Forever Young," and Jay Z came in with his version, "Young Forever." Timberlake told the crowd to "sing this for Trayvon."

On Sunday, Beyoncé honored Martin with a moment of silence during her concert in Nashville. Later in the week, Bruce Springsteen dedicated "American Skin (41 Shots)" to the slain teenager during a show in Limerick, Ireland.

Saturday's protests come one day after President Barack Obama made waves with comments about the controversial verdict. "Trayvon Martin could have been me 35 years ago," he said, adding the nation needs to do some "soul-searching" and examine whether state and federal laws encourage confrontations like the one in Florida.

U.S. Attorney General Eric Holder has said the Justice Department has an open investigation into the case, looking into whether Zimmerman violated Martin's civil rights.